Duke and Duchess of Cambridge Tour the Solomon Islands

The couple was greeted by thousands of locals as they rode in a Toyota that had been decorated to look like a traditional war canoe. 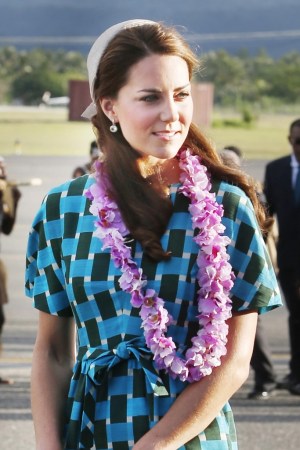 ON THE OFFENSIVE: The Duke and Duchess of Cambridge arrived in the Solomon Islands on Sunday, day six of their royal tour of South East Asia, putting on a brave face as they prepared to seek damages in the French courts for topless photos of the duchess.

The couple was greeted by thousands of locals as they rode in a Toyota that had been decorated to look like a traditional war canoe, with the Duchess wearing a Jonathan Saunders dress. Later, she changed into a strapless fuchsia and orange dress from a local Solomon Island boutique called Print for a dinner hosted by the Governor General at his private residence.

The pair have been putting on a brave face on the royal tour to mark the Queen’s Diamond Jubilee as their lawyers prepare to go to court in Paris today, seeking damages from the Italian-owned publishing house Mondadori after its French title Closer published pictures of the duchess while she was on holiday in France.

They are seeking an injunction against further publication of the topless photos. The Irish Daily Star published a selection of the images on Saturday while the Italian gossip title Chi, which is also owned by Mondadori, has said it plans to publish 50 photos of the duchess and her husband on holiday as a special edition.