The royal caravan decamped to the country's south island to attend a memorial service.

By Patty Huntington and Lorelei Marfil on April 10, 2014
View Slideshow 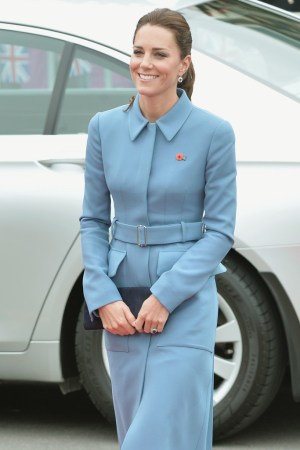 PAYING TRIBUTE: The royal caravan decamped to New Zealand’s south island on Thursday morning, with the Duke and Duchess of Cambridge attending a memorial service at the Blenheim War Memorial to commemorate the 100th anniversary of the outbreak of WWI. The couple, both wearing red poppy remembrance pins, laid a wreath at the base of the memorial to honor New Zealand’s war dead.

After chatting with war veterans and walking through the Blenheim Clock Tower memorial, they later mingled with some of the thousands who had turned up to the adjacent Seymour Square, many waving British flags and carrying flowers and gifts for the Duchess.

Afterwards, they visited Blenheim’s Omaka Heritage Aviation Centre, where they were joined by “The Lord of The Rings” director Sir Peter Jackson for a private tour of the centre’s collection of vintage planes, a number of which belong to Jackson himself. William, a retired RAF search-and-rescue helicopter pilot, took a particular interest in one Sopwith Pup biplane, climbing into its cockpit.

The Duchess wore a forget-me-not blue coat by Sarah Burton for Alexander McQueen, teamed with a navy clutch and pumps. The coat looked to be a customized hybrid of the double leaf crepe Utility Peplum Coat Dress and Utility Coat Dress with utility pockets, waist belt and pleated back skirt, both from the brand’s ‘Pre Spring/Summer’ 2014 collection. Kate’s hair was swept back into a ponytail, showing off her favorite sapphire and diamond earrings that once belonged to her late mother-in-law Diana, a gift from William.

The couple then flew back to Wellington for a State Reception at Government House on Thursday evening.

At the state reception, the royal duo met with New Zealand’s political leaders, and later unveiled a portrait of Queen Elizabeth II by the New Zealand artist Nick Cuthell. The Duchess wore a custom-made Jenny Packham dress for the occasion. The knee-length design, in black crepe with long sleeves, was stitched with embroidered crystal ferns at the shoulder, a nod to one of New Zealand’s national emblems.