The Duke and Duchess of Cambridge were out and about this weekend, as they celebrated World Mental Health Day and attended a rugby match. 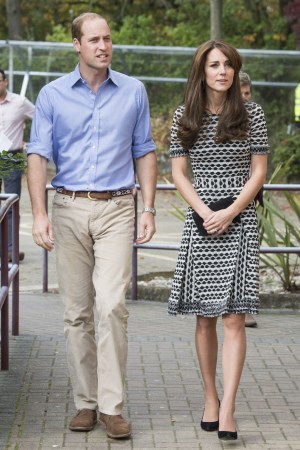 DOUBLE DUTY: The Duke and Duchess of Cambridge were at work over the weekend, celebrating World Mental Health Day with a visit to a charity in London. They attended an event held by Mind, a charity that aids people suffering from mental health problems, at Harrow College, where they met with young people and joined a workshop to learn about some of the relevant issues. The Duchess wore a black and white printed Tory Burch dress, the same one she donned during the royal tour to New Zealand in 2014.

Later on Saturday, the royal couple headed to Twickenham Stadium to watch Australia beat Wales in the Rugby World Cup, where she wore a gray Reiss coat.

The Duke and Duchess are avid rugby supporters, and have attended a number of matches during the World Cup.