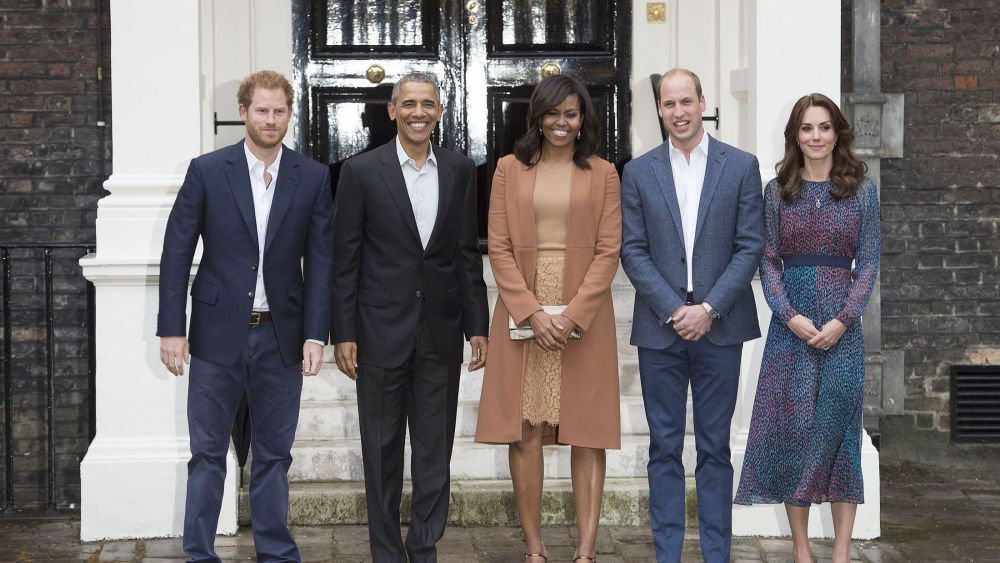 GREETED BY GEORGE: The Duke and Duchess of Cambridge along with Prince Harry hosted a dinner for the President and First Lady Michelle Obama at Kensington Palace on Friday evening.

The President and First Lady were greeted by Prince George, who was dressed in a gingham trimmed white robe from myfirstyears.com, pajamas and slippers. The duchess played with Prince George on the rocking horse gifted by the President and First Lady. She donned a pink and blue printed L.K. Bennett dress with Rupert Sanderson shoes while the First Lady wore an ensemble of a camel coat with a beige blouse, lace skirt and Jimmy Choo shoes.

Earlier in the day, the President joined British Prime minister David Cameron for a press conference. He stated his appeal for the U.K. to remain in the European Union. The Obamas met with Queen Elizabeth and Prince Philip for lunch to celebrate her 90th birthday at Windsor Castle.

Their visit to the U.K. is part of a tour, which includes Saudi Arabia and Germany.

During the First Lady’s last visit to the U.K., she traveled with daughters Sasha and Malia and mother Marian Robinson last June for a weeklong tour of Britain and Italy to support her Let Girls Learn initiative. During her two-day stay, she promoted her campaigns for girls’ education, where she spoke at a roundtable discussion and unveiled a new partnership between the United States and the United Kingdom to improve education for adolescent girls, as part of her Let Girls Learn initiative.