Bringing new meaning to the word “typeface,” the English collective did a clever take on Karl Lagerfeld’s iconic visage, rendering it in a collage of phrases. 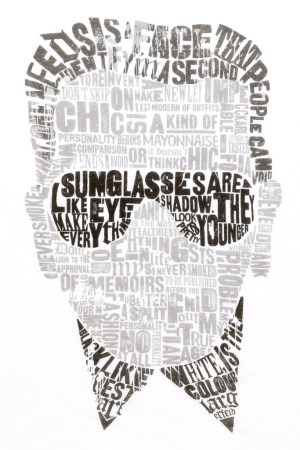 DUST UP: Bringing new meaning to the word “typeface,” the English graphic design agency I Love Dust did a clever take on Karl Lagerfeld’s iconic visage, rendering it in a collage of phrases: The dark shades say “Sunglasses are like eye shadow: They make everything look younger and pretty,” while his signature collar reads, “Black, like white, is the best color.”

The witty design appears on one of four limited-edition T-shirts for women and men by I Love Dust for Lagerfeld’s new Karl line. They are slated to go on sale from May 31 exclusively at the masstige label’s pop-up store at 375 Bleecker Street in New York City as well as at Colette in Paris and on karl.com. They will retail for $95.

“His rings, his hair, his clothes are all perfect elements to interpret through graphics and illustration,” said I Love Dust founders Mark Graham and Ben Beach, whose agency churned out more than 50 options for their famous client. Also selected for production was a sketch of one of his signature fingerless leather gloves.

While occasionally mistaken for a cleaning service, the multidisciplinary collective — with branches in London and Hampshire, England — is known for its playful, narrative style and has also done work with brands including Nike, Kidrobot and Kiehl’s.