DVF on a Mission… Shulman’s Rebel Cry… Cortazar, In or Out?…

Diane von Furstenberg was honored by The Mission Society yesterday. 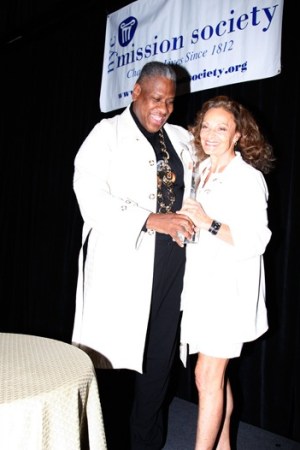 ON A MISSION: Not that long after some of the more hard-core revelers had found their way home following the CFDA Fashion Awards’ after parties, Diane von Furstenberg was already on to the next event by high noon Tuesday. The designer was honored at The Mission Society’s Champions for Children luncheon at the Mandarin Oriental Hotel. Before presenting her with the nonprofit’s Philanthropy Award, André Leon Talley recalled their nights gliding across the banquettes at Studio 54. But Talley was also more tender in describing his friend of more than 30 years. “With all the success and fortune, underneath the veneer of glamour that we both share, there is a little girl who grew up in Belgium and wanted to see the big city lights. She thought with the heart that was always there with the glow and the warmth of the fires built at home,” he said. Dina Merrill Hartley, Stephanie Seymour, Robert Wood Johnson 4th and Bill Ritter were among those in the crowd. Von Furstenberg did what she could to further the cause. She said a visit last week to The Mission Society’s center in Harlem left her most impressed with “how much they care and to see how if you change one child’s life, you change a whole universe’s life. I believe that, because I myself am the daughter of somebody who was supposed to be dead, but she survived and I was born,” referring to her mother surviving more than one concentration camp.

This story first appeared in the June 17, 2009 issue of WWD. Subscribe Today.

SHAPE UP: It remains to be seen whether designers will honor British Vogue editor in chief Alexandra Shulman’s call for roomier clothing samples, but model-turned-snapper Helena Christensen applauds the move. “It’s about time somebody takes action. Obviously I am of the same belief…aren’t we in a business that is supposed to explore all kinds of shapes and silhouettes?” Christensen said Tuesday at the Tommy Hilfiger Paris flagship, where she hosted a charity auction in aid of Breast Health International. “The original supermodels all had shape…and photography in the past was all about the organic, sensual shapes of bodies,” continued Christensen, who revealed she’s collaborated on a bed linen line with Swedish brand Odd Molly, with proceeds to the charity Chernobyl Children’s Project International. Christensen is in Old Molly’s current campaign. “For one bed cover, I wanted to use a huge image that looked like a [photo] that had been torn from an old book and left to fade on a windowsill,” she said.

MAKING WAVES: The first U.N.-declared World Oceans Day was last week and Nautica celebrated its seafaring heritage with an employee cleanup of the Hudson River, marketing initiatives through the day and a party with Vanity Fair. Karen Murray, president of VF Corp.’s sportswear coalition, which includes Nautica, donned rubber gloves and joined over 100 Nautica associates in removing refuse from the banks of the Hudson in lower Manhattan. During the day, Lord & Taylor featured Nautica windows portraying the environmental threats facing the oceans, while eco-friendly pedi-cabs were dispatched to Times Square, Penn Station and other high-traffic areas to promote a new fragrance, Nautica Oceans, a water-based scent that comes in eco-friendly packaging. The day culminated in a party at Hudson Terrace to benefit Oceana, a conservation organization Nautica is sponsoring over the next three years via a cause-marketing platform. Amber Valletta spoke about Oceana’s work, and Estelle sang several songs to a crowd that included Lisa Airan, Minnie Mortimer, New York Ranger Brandon Dubinsky and Danielle Staub of “The Real Housewives of New Jersey.”

IN OR OUT? As reported, Esteban Cortazar is said to be parting with Emanuel Ungaro and, according to sources, has launched a lawsuit against the French fashion house. All the activity, however, didn’t stop the designer from showing up at the CFDA Fashion Awards with model Arlenis Sosa, who turned heads in an Ungaro dress. “I am still there,” Cortazar said, when asked about his current situation at Ungaro. “We are trying to work things out. We have had some differences but hopefully things will work out for the best, whether I am there or not.”

DIEGO’S WEB: Diego Della Valle isn’t letting the global recession squash his entrepreneurial multitasking. According to sources, the latest undertaking orchestrated by the Tod’s SpA chief is the relaunch of Web, an eyewear brand inspired by the sunglasses used by American pilots in the Thirties. Until 2002, Web was produced by Luxottica and put on the back burner until 2006, when the license was handed to Marcolin after Della Valle became a shareholder in the eyewear manufacturer. Now Della Valle is planning a comeback for the shades, which are characterized by a distinctive double bridge and temple with screw core. Web also made ripples in the eyewear industry by being the first brand to launch metal frames with celluloid legs. Angelina Jolie, George Clooney, Claudia Schiffer, Sean Connery, Anthony Hopkins and Princess Caroline of Monaco are some of Web’s fans.

EYE SPY: Everyone knows Karl Lagerfeld is a true professional, and for his latest project recording the voice of baddie character Fabu for the French animated action film for youngsters “Totally Spies,” the designer is said to have given it his all. Lagerfeld carried out the recordings in Paris last month for the film, which is based on the popular kids’ TV series of the same name. “He was very serious about it and very open to criticism,” said a Lagerfeld spokeswoman. “He spent at least eight hours on the dubbing and redid takes until it was exactly right.” Lagerfeld’s character is based on a bitter ex-model who goes about kidnapping people to “fabulous” them, or mold them into his ideal image, she said. The film’s French release is scheduled for next month.