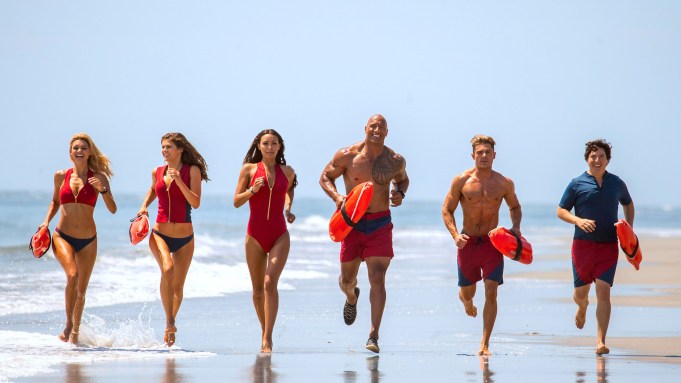 There are few television swimsuits as memorable as the red one-piece and swim trunks worn by Pamela Anderson and David Hasselhoff in “Baywatch,” the long running television series that glorified Southern California lifeguards from 1989 to 2001. This being the age of the Hollywood reboot, summer’s kickoff popcorn flick is “Baywatch,” hitting theaters May 25 and starring Dwayne Johnson, Priyanka Chopra, Zac Efron, Alexandra Daddario and Kelly Rohrbach (along with cameos from Anderson and The Hoff).

Costume designer Dayna Pink, whose credits include “Crazy, Stupid Love” and “Hot Tub Time Machine,” said the idea of taking the memorable suits and updating them for 2017 was “a dream job.”

“We could have kept it exactly the same — that bathing suit is still being sold at American Apparel — but I thought, ‘Let’s change it and have fun,'” she said.

Order number one was altering the red hue to make it less orange-y and more ruby. Then changing the fabric from Lycra to a Neoprene-inspired one that had a sexy big-screen shine to it. Pink then added gold zippers as detail. “The gold zipper, ruby-red color, wet skin, sun tans and water all jump out at you on screen,” she said.

Pink also tweaked the silhouette of the classic high-cut tank suit and trunks to fit each character. “Our clothes tell us everything about a person, and I wanted each actor’s costume to help tell their story,” she said.

For Stephanie Holden (played by Ilfenesh Hadera), love interest of lead lifeguard Mitch Buchannon (played by Johnson), she designed a long-sleeve one-piece that she wears zipped up. Summer Quinn, played by Daddario in the remake and Nicole Eggert in the original, is the sporty new recruit who wears a rash guard-style vest, slightly unzipped, and accented with navy blue. For Rohrbach, who plays the CJ Parker role originated by Anderson, she didn’t mess too much with tradition and kept her in a solid red one-piece, albeit jazzed up with zippers.

“All the women have incredible bodies and they all could have worn anything, but I wanted to keep them all a bit different,” said Pink.

For Johnson and Efron’s trunks, she lengthened them a bit from the original versions, though Johnson’s are still shorter than Efron’s. The young heart throb plays new recruit Matt Brody, a disgraced Olympian. Each actor had at least a dozen suits custom-made for them; Under Armour helped produce the suits.

Though the cast rarely wears street clothes, Chopra wears a sexy long dress in a pivotal scene, accessorized with Christian Louboutin heels. “It’s a black and silver gown that I designed to blow in the wind as she walks up a ladder, showing the holster on her thigh,” said Pink.

The costume designer is currently at work on another Eighties-set film, which she calls her favorite decade. “I’m deep in acid washed jeans and shoulder pads,” she laughed. She’s also designing uniforms for a resort property in California, adding, “There is a lifeguard, so it could be ‘Baywatch’-inspired, you never know.”