Five special showcases on the main floor, plus a window, and the ongoing in-store boutique display his masterful one-of-a-kind archival jewelry. 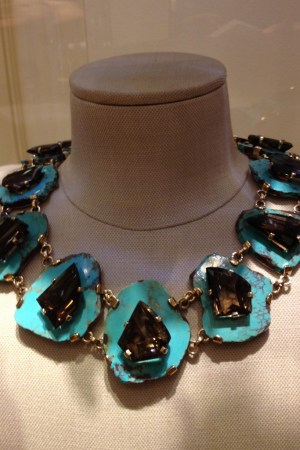 DWECK’S DAY: “Where did the years go?” asked Stephen Dweck, as he waxed nostalgic amid the retrospective launched at Bergdorf Goodman on Thursday celebrating his 30 years in the jewelry business. “Bergdorf was the first store that bought my collection in 1981.”

Bergdorf’s maintains the Manhattan exclusive while Neiman Marcus and other specialty stores sell the brand around the country. Dweck said he’s leaning to also selling Saks Fifth Avenue though Bergdorf’s has been very accommodating, particularly with the current exhibit. Five special showcases on the main floor, plus a window, and the ongoing in-store boutique display Dweck’s masterful one-of-a-kind archival jewelry. “Which stone is important? For me, there is no priority. I use stones from all over the world,” Dweck said.

One showcase exudes the luxury appeal, with a $65,000 multigemstone, solid gold bracelet with diamonds, shown with earrings and a cocktail ring, both in solid gold with diamond clusters. There’s also a $80,000 tourmaline necklace with diamonds, South Sea pearls and sapphires, though Dweck said, “You can join the club with a $385 quartz ring.”