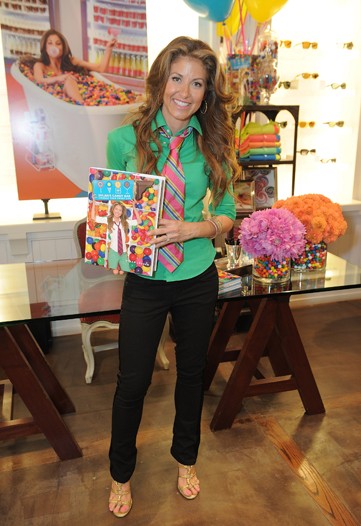 SWEET DEAL: Dylan Lauren continued her book tour for “Dylan’s Candy Bar: Unwrap Your Sweet Life” in Los Angeles last week at Ralph Lauren’s Robertson Boulevard boutique (a local Candy Bar is coming soon). While most celebrity host pairings can seem random, co-host Lauren Graham hardly had to play six degrees of separation for the gig. “My father is the head of the chocolate and candy maker’s association, so he likes to take credit for this,” said Graham, who is also old pals with Greg Lauren (Dylan’s cousin) and Elizabeth Berkley. “I’ve been joking with them for years that I should marry Greg so my name could be Lauren Lauren.” Graham’s “Parenthood” co-star Joy Bryant played co-host, chatting with fellow actress Jessica Chastain, who brought her mother and grandmother. Dylan Lauren, who was overwhelmed singing books for the 430 guests, said, “No new books just yet.”

Rosemary DeWitt, star of Weisz’s short “The Thief,” about a woman who offers comfort to a man who’s broken into her home, was in awe of her director’s work. “I wish we were doing a feature, let’s put it that way,” she said.

For Biel and Mendes, the excitement of seeing their films on the big screen was palpable. “There are just so many components that have to come together that are fun and enjoyable,” Mendes explained, quickly becoming distracted as she caught her first glimpse of the film’s poster, which showed a Hockney-esque California scene. “That’s awesome!”

After the screening, guests headed to Chateau Marmont for the after party where Biel’s beau, Justin Timberlake, joined the group to celebrate.

TIMBERLAND GOES BIONIC: Timberland has partnered with Pharrell Williams’ Bionic Yarn to produce an extensive range of footwear for spring that will use the company’s innovative fabric that’s made in part from recycled plastic bottles. “Timberland has been a part of my life since I was a kid, so I’m really happy they have incorporated Bionic Yarn in their brand in such a big way,” said Williams, the N.E.R.D. front man and music producer who co-owns Bionic Yarn with Tim Coombs and Tyson Toussant. Timberland is offering more than 90 different styles of shoes and boots with Bionic Yarn’s canvas material, which is made from 50 percent organic cotton wrapped around a core of 38 percent recycled PET plastic and 12 percent high-tenacity polyester. The line will hit stores in January and features hangtags calling out the practical and environmental attributes of the canvas. “We’re constantly looking for innovative new materials that deliver on our high performance standards for the outdoors,” said John Healy, general manager for Timberland’s Invention Factory. “This is a huge development for spring, a time when canvas is a must-have for consumers.” Other brands that have partnered with Bionic Yarn include Gap Japan, Cole Haan, Moncler and Williams’ own Billionaire Boys Club and Ice Cream labels.

STELLA, TAKE TWO: Stella McCartney is collaborating with Target in Australia for the second time on a range of clothing that made its debut Monday. The capsule collection is part of Designers for Target, and will feature 40 pieces with an entry price point of $28. McCartney’s previous collection for Australian Target bowed in 2007. “This collection is really much more about evening, much more luxurious,” said McCartney. “We addressed daywear specifically with the last collection, and with this one we focused much more on cocktail styles that can also adapt to daywear.” The Stella McCartney for Target collection will be sold to Australian Target’s 102 stores.

FAST LANE: Marchesa’s Georgina Chapman is one of several designers helping Land Rover launch its new Range Rover Evoque car. Chapman, Henry Holland and a slew of other design cognoscenti were tapped to partner with the brand as part of the launch, which is the smallest and greenest Range Rover ever. “Its design is inspired by city architecture and a big part of a city is the people within it, their journeys and their conversations,” Land Rover managing director Phil Popham said.

As part of the deal, Chapman is expected to participate in several initiatives, including activities around the New York International Auto Show and an event with Land Rover Manhattan at a top Marchesa retailer. Range Rover will also sponsor Marchesa’s fall 2011 presentation in February. But the best part is reserved for Chapman herself. She will get to drive an Evoque Range Rover, and tweet her impressions on Twitter via @MarchesaFashion. Sadly for her, though, it’s just a long loan and she won’t get to keep the car.

LAUDER LIGHTS UP HARRODS: Estée Lauder ambassador Elizabeth Hurley was enough of a draw to coax scores of London shoppers into the cold last week, to see the model illuminate Harrods in pink light. The event was held to mark both Breast Cancer Awareness Month and Estée Lauder’s 50 years in the U.K.

“For 11 years we have lit a landmark pink, and this year we’re going to light up the old lady of Knightsbridge, Harrods,” said William Lauder.

And Hurley was a gracious host to guests who had braved the elements to see the lights. “Thank you so much for coming out on this cold and wet night,” said Hurley as she prepared to flip the switch. “And no one’s colder and wetter than me, as I’m in a small dress and you’re all in coats.”

But soon enough, the guests repaired to the comfort of Harrods’ Georgian restaurant. There, the crowd mingled among blooms of pink hydrangeas while sipping, appropriately, rosé Champagne.