Eckhaus Latta and Ugg Throw an L.A. Dinner Party in Honor of Their Collaboration

The Haim sisters showed up in support of the event, held in Montecito Heights. The collection is available worldwide on Sept. 3. 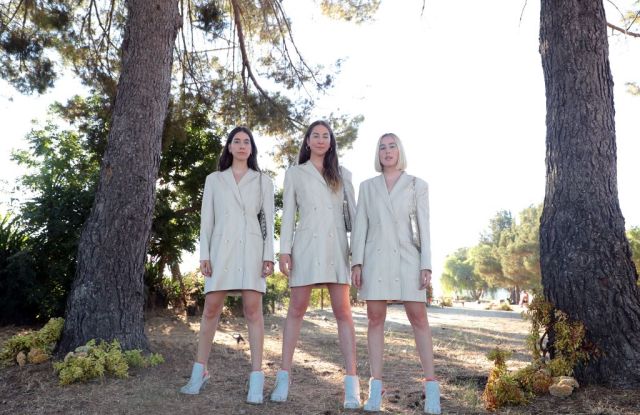 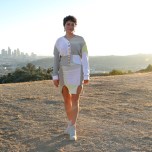 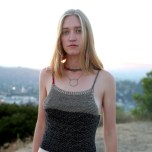 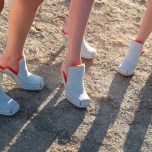 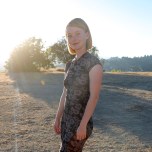 “You can see my house from here,” said L.A. native Este Haim on a summit of Montecito Heights overlooking Los Angeles on Wednesday night. Leave it to Eckhaus Latta to showcase someplace new, a part of town in Northeast L.A. — east of Echo Park — unfamiliar to most. “You can also see the high school I went to. This view doesn’t suck.”

The bicoastal brand, founded in New York City by Zoe Latta and Mike Eckhaus in 2011, was throwing an al fresco dinner party to celebrate their recent collaboration with Ugg.

“We listened to a lot of techno in the car,” she said of the ride over with sisters and Haim bandmembers, Danielle and Alana Haim. “We listened to a bunch of Eiffel 65. And do you remember Rockell? She was a late-Ninties techno artist. When we’re on our way to a party or dinner, we like to put on music that helps inform the vibe of the night to come.”

“These are my sisters,” she continued, as Danielle and Alana appeared. The three were donning the same outfit, head to toe.

“It’s legitimately the same garment,” said Este. “We had the opportunity to, and we just kind of grabbed the bull by the horns. Why not? Who doesn’t love a power suit, blazer moment?” Naturally, it was by Eckhaus Latta, and for shoes, they opted for the $475, gray and mandarin orange “court mule” from the collaboration.

The collection offers four other designs, from an open toe mule, $455, to the “block boot,” a $525 square-toe silhouette that’s most similar to Ugg’s recognizable shape. There’s also outerwear: a $5,995 overcoat and $4,995 shawl coat, both made of Toscana sheepskin, as well as a jacket, $2,495, and vest, $1,995. The line, which debuted at Eckhaus Latta’s fall 2019 New York Fashion Week show, will be available online and at worldwide Ugg retailers on Sept. 3.

“We’ve been very big Eckhaus Latta fans for a couple years now,” said Danielle. “It’s cool that they’ve had an L.A. store. They’re just so talented and have such an interesting point of view. And obviously Ugg, we’ve been fans for a while now.”

“Requesting Ugg for every Hanukkah, every year as children,” added Este. The band recently debuted their newest single, “Summer Girls,” their first release since their sophomore endeavor, 2017’s “Something To Tell You.”

“We shot it on film, and we couldn’t see the shots back so the whole time I was like, ‘I hope I don’t look f—ing awkward,’” said Danielle of the “Summer Girls” music video, directed by Paul Thomas Anderson. In the clip, they each remove layers and layers of clothing, until they’re down to summer ensembles.

“It was a big exercise in trust,” said Alana. “Making the music video was so much fun. We did it very guerrilla style. It was very off the cuff.”

They’re looking forward to releasing more music and touring, she shared. They next play in New York City on Aug. 20.

“I wish that summer could last forever,” said Alana, looking around at the dinner setting, a vast, open landscape overlooking her hometown. “Clearly, this is magic.”

The dinner’s location was found by Latta, it turned out.

“I’ve been seeing this radio tower, and then I looked it up online,” said the designer. “I’ve been here in L.A. for five years, but I definitely feel like I’m new here. There’s a lot of exploring to do. I, personally, and the store and the studio all moved this summer, closer to this side of town.”

Their retail and work space was previously in Little Armenia and is now on 980 North Broadway in Chinatown.

“We have a fashion show coming in a couple of weeks,” said Eckhaus. The duo will showcase their 2020 spring collection during New York Fashion Week on the afternoon of Sept. 10.

“That’s what we’re working on — and a couple of other things that we can’t talk about,” he added with a smile.

A seemingly endless table was placed in the center of the wide, rustic space. A violinist played as guests took their seats for dinner, featuring vegetarian dishes and lamb, followed by ricotta tartlets and a digestive of mezcal and amaro. The drink was served in small ceramic cups, illustrated with images of the collection. As it got darker and the city lights twinkled in the backdrop, the band Jazzy Romero began to play. By then, the crowd, family and friends of Eckhaus Latta — Alia Shawkat, Kacy Hill, Rachel Nguyen, Empress Of, Coco Gordon Moore, Michael Bailey-Gates, Arley Marks, Jacob Bixenman — were wandering, mingling and dancing.

“Hi, I had to join in to say something,” said Kate Berlant, grabbing the microphone from Eckhaus as he was making a speech earlier in the evening. The comedian brought comic relief for the night, acting as an heiress of Ugg. “For those of you who I haven’t met, I’m Caroline Ugg. I’m sure a lot of you I saw when I was coming up the driveway — a lot of gasps, ‘She came, she came.’…To be part of the Ugg family in the literal sense is, of course, a huge honor.”

“To look out right now at this view and all the poor people down there,” she continued to laughs from the crowd. “And here we are, up here, literally elevated above them, forced to look down, forced to wonder what that must be like…thank you for asking me to speak. I’m sorry I’m not speaking longer. Please enjoy. I need a ride home. Please enjoy.”

“That took me a second,” said a guest afterward. “I was like, is she really from Ugg?”

The Australian-born brand focuses on [working with designers] with a California connection, either born or living here,” said Andrea O’Donnell, president of Deckers Brands, which is based in Santa Barbara and owns Ugg. “With Mike and Zoe, we were looking at new, up-and-coming talent, and their names came up quite a lot. They do really interesting, very creative things. Their aesthetic is a really different combination of modern, intellectual but also very sexy. I was really fascinated by what they were doing, and it blossomed from there. We really love what they did with the product.”

“We brought them to our head office, and we showed them the kind of things we do…and they got really excited about the opportunity to really rethink what an Ugg classic boot could stand for, so the square toe was a moment,” she continued. “We were all like, ‘Oh, my God, really?’ But it was a really beautiful moment, because we had never really gone or pushed ourselves that far to really rethink about what our icons could stand for.”

Their last collaboration of the sort was with Jeremy Scott in 2017.

“For us, what’s really important is that we find a new way to talk about the Ugg brand,” she said of working with other designers. “It’s an exercise in creativity than it is an exercise in commerciality, and I think when you approach it from that perspective, the product that comes through isn’t just another thing. It’s an actual, beautiful moment.”