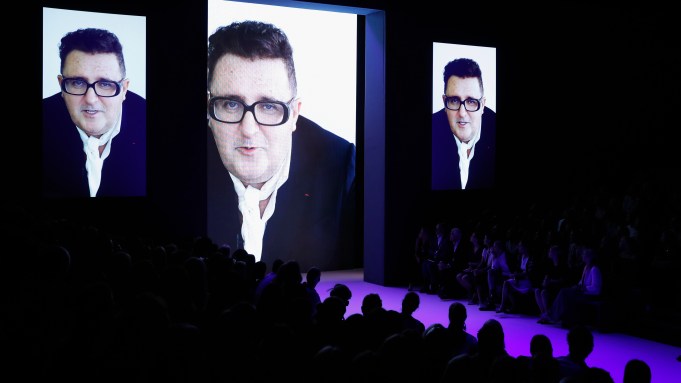 For some designers, fabric is the starting point of their collections. For others, it’s their initial sketches. But for Edda Gimnes, it’s neither. Or actually both.

The Norwegian born, London College of Fashion graduate begins by creating graphic drawings executed with her left hand though she is right-handed, and which possibly adds to their naïve charm. Blown up across canvas or reworked in fur, these drawings, inspired by an eclectic collection of found vintage photographs and objects, animate her living fashion cutouts. While this approach earned her more trouble than praise as a student, it has now paid off, earning her the 2016 Designer for Tomorrow title, sponsored by German specialty store chain Peek & Cloppenburg and its online shop Fashion ID, and this year under the patronship of Alber Elbaz.

Although Elbaz, who is recuperating from pneumonia, was not allowed by his doctors to fly to Berlin for the June 30 DFT show held during Mercedes-Benz Fashion Week Berlin, he was nonetheless most perceptibly present. Jury members all remarked how his hand — and his eye — could be felt in the cull of the first 15 finalists. Filmed the night before the show in Paris, his video welcome to the five finalists and the audience couldn’t have been more personal.

Watching the live-stream of the show, and together with the eight member jury board choosing the winner, Elbaz said he saw a lot of potential in Gimnes. “She captured my imagination and I’m keen to find out how her talent will evolve,” he said. The young creative will soon be meeting Elbaz in person, a trip to Paris to meet the designer the next step in the one-year sponsorship program.