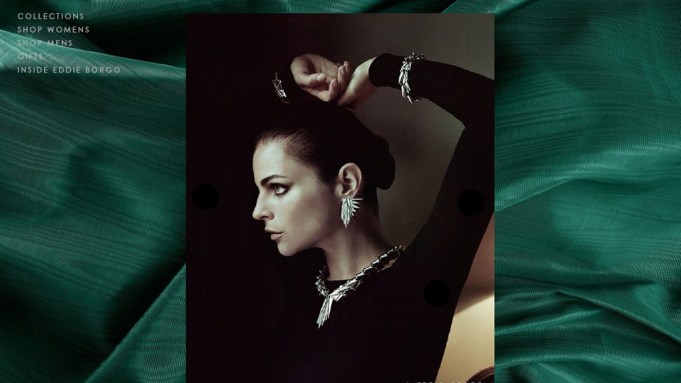 BIRTHDAY BORGO: Eddie Borgo’s brand is turning five with a virtual makeover. “I wouldn’t go so far as to say it was an afterthought, but when we launched five years ago, our Web site wasn’t something that we invested a lot of time and effort into,” said the designer, who wanted the new site, designed with Magnus Berger and Tenzin Wild of image and branding agency Berger & Wild, to reflect the current mood and movement of the brand. Launched at eddieborgo.com, the redesign boasts an easier-to-navigate e-commerce functionality, exclusive pieces and colorways, and a bigger range of product, including greatest hits like the best-selling fall 2010 collection — the one inspired by spiders, orchids and other natural shapes. “People kept asking us for it,” Borgo said. “And frankly, because we move from collection to collection and follow a calendar, we never really considered reproducing those past collections, but now the Web site will give us a chance [to do so].”

The company also revealed its new brand color — an inky bottle green, chosen for its connection to luxury and heritage — which will be represented throughout the site and incorporated on all of the brand’s packaging. “We’ve been pinned over time as this rock ’n’ roll jewelry brand, but we’ve carved a niche for ourselves in the marketplace in that we’re not a fine jewelry company or a costume jewelry company, but sort of in between,” Borgo said, adding that retailers often don’t know where to place his brand on jewelry floors. “I like the fact that we’re this modern imbalanced company.”

The brand’s former e-commerce site made up less than 10 percent of its total sales, but the company expects the new site to be a significant driver of growth in 2014.

Up next could be a full-on launch into fine jewelry (Borgo produced a capsule collection of fine jewelry for Lane Crawford in October), as well as leather and home goods. “I want the Web site to be a launching pad for new categories, like home and objects,” Borgo said. “We’ve already done a pencil case, a letter opener, paperweights and jewelry trunks.…I would like to see the Web site become a platform for not only jewelry, but for an entire accessories brand.”