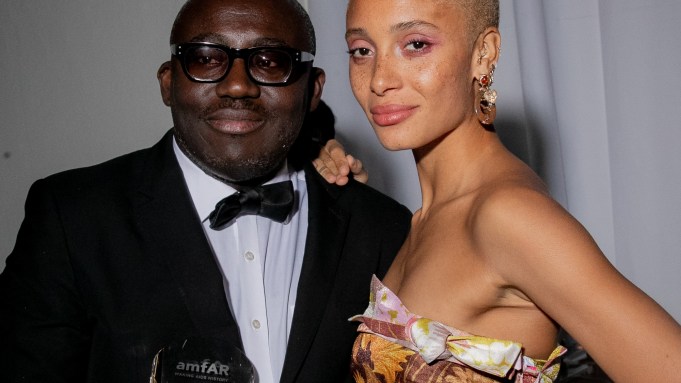 BRAVE BOY: British Vogue editor in chief Edward Enninful received amfAR’s Award of Courage in recognition of his outstanding personal commitment to the fight against AIDS on Saturday night, during the tenth Milan edition of the gala event.

“Growing up in West London in the Eighties, I saw the hostility, fear and rejection that HIV brought to the gay community. Those were difficult times that will never be forgotten. Many men and women refused to surrender in the face of this global crisis and yet today the greatest battle left to fight against HIV is stigma,” he said during his speech. He was introduced on the stage by Adwoa Aboah, the model who appeared on the cover of British Vogue’s first issue under the direction of Enninful.

“In a world that is increasingly divided we must remember: We’re more alike than we are different. This is not the disease of others. We all share the responsibility to promote tolerance and compassion for each other within our communities,” Enninful said. “British Vogue is about being inclusive, it’s about being brave, it’s about representing the under-represented with a voice. My Courage Award goes to all the brave people that continue to drive us forward and not back.”

During the event, amFAR hosted an auction of several artworks and experiences, including tickets for the 2018 Victoria’s Secret Fashion Show and two tickets for the 76th Annual Golden Globes, introduced respectively by Evan Ross and Ashlee Simpson. It raised a total of $1.2 million.