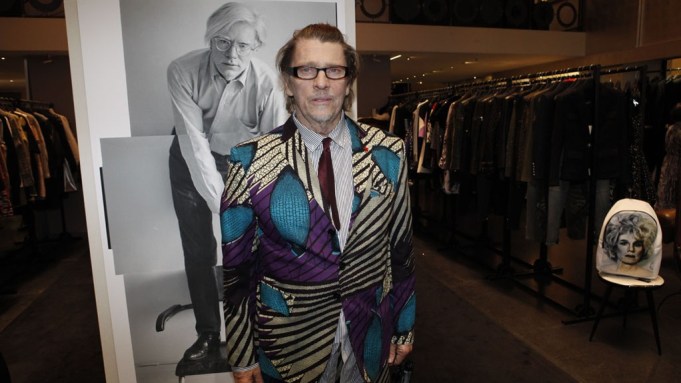 INTO THE GROOVE: Paris took on an aura of Eighties downtown New York on Friday night as two legends of the city’s underground arts scene presented clothing collaborations.

Christopher Makos was at concept store L’Eclaireur on Rue Boissy d’Anglas, which hosted “Altered Images,” an exhibition of his photographs of Andy Warhol and other luminaries organized by Ports 1961, which has designed a limited-edition line featuring portraits of Warhol in a wig and makeup.

“Halston asked us if we wanted to borrow a dress and we said, ‘No.’ So they’re not drag pictures – it’s altering somebody’s image. And I thought these images are so perfect for anywhere during a fashion week,” Makos said.

It was just the latest stop in a world tour that has already taken in Milan, New York and London and will stop off in Seoul, Tokyo, Beijing and Shanghai before year-end.

“A lot of it is sold out and so many people stopped me in Paris this past week asking me where can they get it,” said Fiona Cibani, creative director of Ports 1961, wearing a white bomber jacket that was sold only on the New York leg of the tour.

“It’s limited edition and we want it to be really specific to that area. It’s not about just selling something, it’s about making things interesting and people talking about it and wanting it,” said Cibani, adding that she was a longtime fan of the photographer’s work.

Makos has gathered his black-and-white images into a coffee table book called “Everything” and recently designed a limited-edition bottle to mark the 50th anniversary of Kiehl’s Blue Astringent Herbal Lotion. “It’s nice as you get older to have moments because you know, you’re never really sure, like, is there room for more moments? And the answer is yes. I’m enjoying my life a lot,” he said.

L’Eclaireur founder Armand Hadida said the store would open a Los Angeles branch in West Hollywood early next year. Meanwhile, the Tranoï trade show for which he is artistic director will hold its first New York edition next season, as reported. “It’s going to be an American year,” he noted.

Over at Galeries Lafayette, artist, film producer and stylist Maripol was on hand for a cocktail celebrating her capsule collection for French contemporary label Each x Other, which includes a silk dress printed with a photocollage of Polaroids, as well as signed and numbered artist multiples.

Wearing a silk shirt with a print made from vintage flyers, she beamed as her son Lino Meoli, who was DJing, played “Love Each Other,” her musical debut recorded especially for the event. “When I was little, I sang professionally in church choirs. I’ve always had a very low voice. But this was harder,” she noted.

Instrumental in shaping the look of artists like Madonna and Debbie Harry, Maripol has previously collaborated with Marc Jacobs and has her own jewelry line, Atomic Glamour. She is already thinking about her next collection for Each x Other, set to bow next fall, but is ready to close the page on the Eighties.

“My next art project is packing my life into boxes, so there will be trunks for different years, a bit like Andy Warhol’s Time Capsules. It’s going to be an exhibition, I hope,” she explained.

“It’s the end of an era for me and I would like to move forward, because as you know, my image is very strongly linked to the Eighties and it annoys me, because I have evolved and I’ve done many things since,” she added. “One can no longer live in the past, that’s all.”