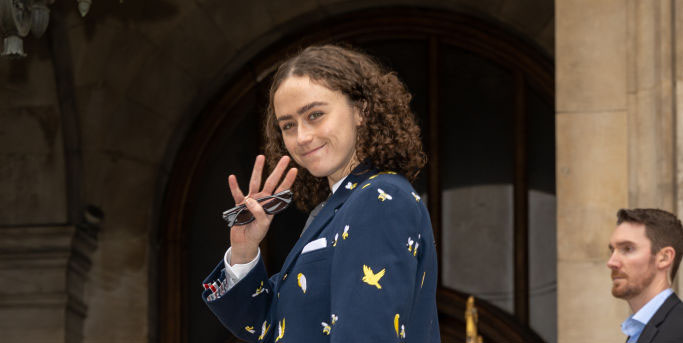 The model, designer and stepdaughter of Vice President Kamala Harris wore a prep school silhouette with a camp-like spin featuring a duck and bee motif. Emhoff wore a navy blazer narrow shoulder jacket with a gray skinny tie, and an off-white button-up shirt. She coordinated with a khaki skirt that was also emblazoned with the print.

Emhoff accessorized with Thom Browne’s Mrs. Thom bag in black calfskin with a top handle, snap fastening and gold-tone hardware. For footwear, she completed the look with Mary Janes set on block heels.

The outfit was left to speak for itself, as Emhoff opted for minimal to no makeup. She parted her curly hair down the middle.

Thom Browne’s latest collection was inspired by Cinderella and other fairy tales and garnered its share of attention for silk taffeta varsity opera coats.

Since entering the spotlight after the inauguration of President Joe Biden and the swearing-in of her stepmother, Vice President Kamala Harris, Emhoff has made headlines for her style and shortly thereafter she was signed to IMG Models.