The 21-year-old actress has dazzled on the red carpet in looks by Gucci, Dior and Prada. 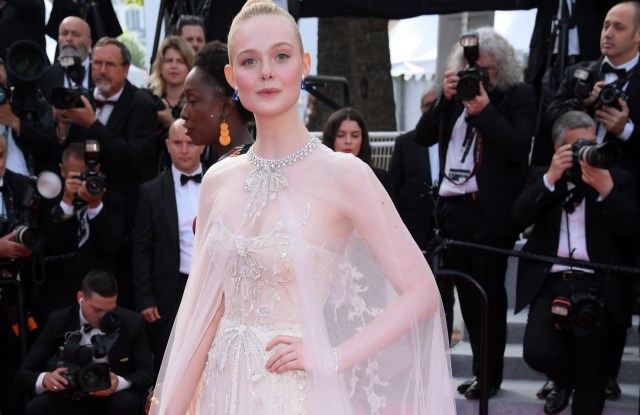 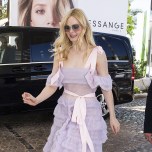 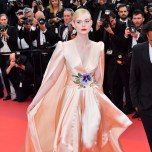 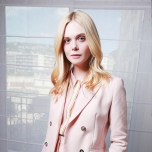 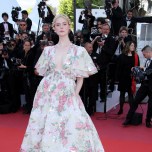 The 21-year-old actress, who recently starred in Max Minghella’s directorial debut, “Teen Spirit,” has left her mark at the Cannes Film Festival, which arguably produces the most glamorous red carpet of the year.

The actress has repeatedly worn memorable looks during this year’s festival, starting off with a custom peach Gucci dress, which Fanning explained to WWD in an exclusive interview as “something I’ve never worn before, it’s definitely a different silhouette for me. I tried to go for an Old Hollywood vibe, but it also looked a little boudoir, like a really fancy nightgown.”

Read more from the Cannes Film Festival: Elle Fanning on Growing Up in Film

She continued the week with other high-fashion looks with the help of her stylist, Samantha McMillen, in looks from brands such as Prada, Valentino and Dior. Fanning did, though, encounter a bit of a setback during the Trophée Chopard dinner on Monday with her custom Prada gown, which was designed with a built-in corset that caused her to have fainting spell. The actress took to her Instagram to share the news that she’s feeling much better, writing: “Oops, had a fainting spell tonight in my 1950’s Prada prom dress but it’s all good!! #dresstootight #timeofthemonth”

Oops, had a fainting spell tonight in my 1950’s Prada prom dress but it’s all good!! #dresstootight #timeofthemonth

Fanning then closed out the Cannes Film Festival in a Reem Acra gown from the designer’s fall 2019 bridal collection complete with intricate beading, a tulle cape and Chopard jewelry.

Tilda Swinton Talks Opening Cannes and Her Next Film Project