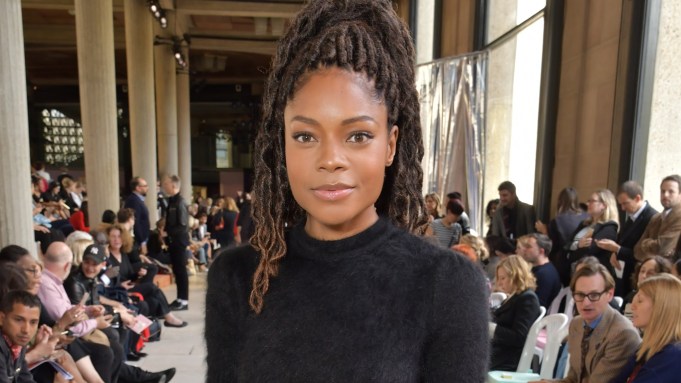 For Elle Fanning, it was a flying visit. “I flew in this morning from New York, I’m filming with Woody Allen, we’re in the middle of that,” she said. She will be jetting back Stateside tomorrow. “It’s very fun, we’re having a really good time,” she said of the project. She wasn’t revealing much more, though. “[Allen] is so secretive about the project so I don’t want to say too much, I don’t want to get into trouble, but it is set in New York, we’re filming everything in New York.”

Harris was also playing it coy. “I’m not giving interviews at the moment,” she smiled, her long dreadlocks in a striking updo — perhaps she was nervous about fielding inevitable questions on whether she will reprise her role as Eve Moneypenny in the next “James Bond” movie.

Elle Fanning said she had also recently wrapped “Teen Spirit” in London, out next year. “I sing, I was nervous about that,” she said, although it has always been an ambition of hers. “I don’t think people know, but when I was younger I thought maybe I’ll be an actress or maybe I’ll be a pop star,” she said. “It’s always been my fantasy in a way.”

Sister Dakota, meanwhile, has just completed television drama “The Alienist,” due out in January. “The quality of the sets and the costumes was more amazing than anything I have ever done before,” she said of her first television experience, filmed in a Budapest representing 1896 New York. “It was a six-month experience, you get really comfortable with the people you’re working with and invested in the world you’re living in,” she added.

Gyllenhaal, who brought along her 11-year-old daughter Ramona for her first fashion show, recently completed Sarah Colangelo’s “The Kindergarten Teacher.”

She summed up the plot, “It’s a sort of Polanski-type thriller about a woman who is a poet, also a kindergarten teacher and nobody cares about her poetry, and she starts to become obsessed with a child in her kindergarten class, she starts to think he’s a poetic genius.”

There was also a Polanski sitting front row: actress Morgane, who had just returned from shooting Julien Landais’ adaptation of Henry James’ “The Aspern Papers” in Venice alongside Jonathan Rhys-Meyers and Vanessa Redgrave, and had also just finished her second short film, which she wrote and directed.

“It’s about a guy who’s really OCD and is very safe in his clean flat, and there’s this black cat that keeps coming outside his window and he goes to kill him,” she summed up. “It’s a comedy.”