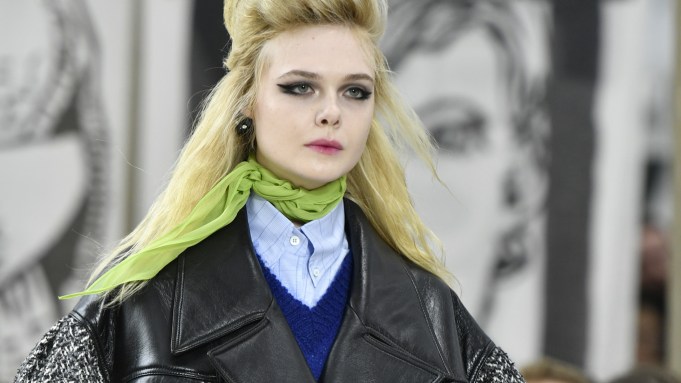 STEPPING OUT: Elle Fanning was buzzing after her runway debut Tuesday at Miu Miu, grinning euphorically as guests congratulated her after the show. “The adrenalin,” she exclaimed breathlessly. “Oh my god!” She enthused, “It was incredible. You think it’s just walking but it’s not.”

While she may never have walked in a show before, the actress, who sat front row at the Miu Miu spring show last October, said she had used her experience playing a model in Nicolas Winding Refn’s 2016 movie “The Neon Demon” to inspire her performance.

“I used tips of what Abbey Lee had taught me, of how to walk and the posture of that,” she said. “But in a movie, you have a lot of takes and you’re not as nervous. If you mess up, it’s OK; but [here] no, because Anna Wintour’s staring at me, and I was like no, I’m not messing up.”

Christie strode in just as the show was about to start, sporting a striking check coat over her long black dress.

The towering “Game of Thrones” actress has had frocks on her mind a lot lately; she will appear later this year in “In Fabric,” a movie about a haunted dress. “It’s a rather brilliant film by a director called Peter Strickland, who I have wanted to work with for a long time,” she said. “It’s an opportunity to play a very different sort of character. I love design and I love clothes, and Peter’s aesthetic is really extraordinary, he has a boldness about what he does in the way that Dario Argento has that incredible boldness. But what I also loved about it is that I am playing this extremely nasty character called Gwen,” she said.

David Harbour, just back from an expedition with Sudol to Antarctica for Greenpeace, had more homely projects in mind. “I plan on trying to cook a rotisserie chicken in the next month,” he said. “That’s sort of my near future plan, I don’t think it’s going to happen though, I’m not very good at things like that. I think I’ll probably just eat cereal,” he quipped.

In more serious mode, it’ll soon be back to work on season three of “Stranger Things.” He said, “We’re kind of getting ready to get back to doing our show, so I’m preparing a little bit for that…and trying to cook that chicken.”

Sudol, who is also a musician and will be releasing a new record soon, was still buzzing from the South Pole excursion.

“It was life-changing, really powerful,” she said. “There’s so much wildlife down there, it’s such an extraordinary area of marine biodiversity and it’s really pristine and we have a chance to protect it now.”

Physically, however, she admitted the trip was a challenge. “We took an icebreaker boat down through the Drake Passage, some of the roughest water in the world, which was rather intense, neither one of us are sailors particularly and there was a lot of sea-sickness meds going on. We just got back, so this is literally the polar opposite,” she said, taking in the surroundings.

For her part, Brosnahan said she was about to start shooting the second season of “The Marvelous Mrs. Maisel” for Amazon. “We’re actually going to be shooting here in Paris in the next couple of weeks,” she said, although further details were still under wraps.

Dano, meanwhile, is making his directing debut with “Wildlife,” which he co-wrote with girlfriend Kazan, starring Carey Mulligan and Jake Gyllenhaal. “It’s about family, about a kid seeing his parents change and a marriage breaking. Classic American,” he summed up of the movie, due out this fall.