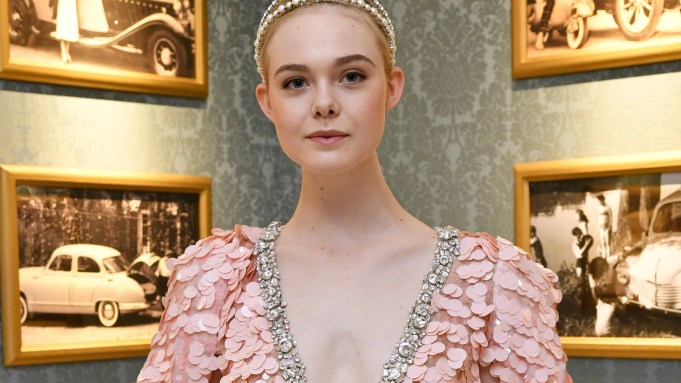 Elle Fanning is getting ready to test her pipes.

“Yes, I sing. It’s something that people are kind of surprised by because I haven’t gotten to utilize it,” the 19-year-old actress said Sunday night at the Miu Miu show, whose soundtrack included such singing actresses as Marilyn Monroe.

Fanning is about to start filming Max Minghella’s “Teen Spirit” in London, in which she plays an aspiring pop star who enters an international singing competition. The costumes are still being finalized, but are likely to have an “English vibe,” she noted. “We’re still finalizing her look when she performs.”

Guests including Stacy Martin, Gwendoline Christie and Anna Brewster marveled at the venue, the Automobile Club de France, with its gilded rooms overlooking the Place de la Concorde and a vast library where the cabaret-style fashion spectacle took place.

“They said the first car in the world is here — somewhere,” Fanning noted.

Martin, who was born in France, is about to start filming “Amanda” in Paris opposite Vincent Lacoste. “It’s about a family, belonging and love,” she said dreamily.

Christie said filming is about to start “any second now” on an untitled Robert Zemeckis project based on Jeff Malmberg’s 2010 documentary “Marwencol.”

The “Game of Thrones” and “Top of the Lake” actress said she plays the Russian caregiver to Steve Carell, a cross-dresser who builds a miniature village as a way to recover from a violent assault outside a bar. The movie depicts how artistic imagination can restore the human spirit.

Milla Jovovich is in the French capital two photo shoots — one for a new Joop perfume, and another for Egoiste magazine with her nine-year-old daughter, Ever. Ellen von Unwerth will be behind the camera for the latter shoot, she noted.