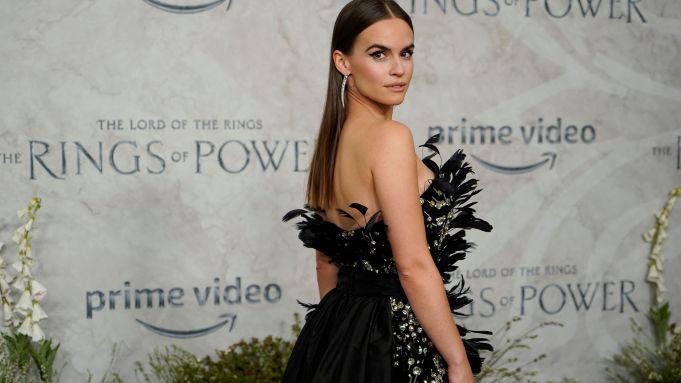 Ema Horvath is continuing her streak of fashion-forward moments.

On Tuesday, the emerging actress attended the latest premiere of “The Lord of the Rings: The Rings of Power” at Odeon cinema in London’s Leicester Square. She wore a black strapless gown by Elie Saab from the label’s fall 2020 collection that featured crystal embellishments and feathers throughout and a see-through skirt.

She topped off her look with platform heels by Christian Louboutin and drop diamond earrings. She styled her brunette hair straight and kept her makeup simple.

She was styled by Cheryl Konteh, who also works with Kate Winslet and Idris Elba.

Horvath is part of the main cast of the upcoming Prime Video series, which is a prequel to the blockbuster trilogies of “The Lord of the Rings” and “The Hobbit,” both of which are based on J.R.R. Tolkien’s books of the same name. The two were adapted into popular movies directed by Peter Jackson, accruing billions of dollars in total box-office revenue.

Horvath has been tapped to play Eärien in the show, which is set thousands of years before the events of “The Lord of the Rings” and “The Hobbit,” the latter of which is already a prequel to the former.

Eärien is Isildur’s sister and a character that was created for the series. Isildur, who will be played by Maxim Baldry, is a Númenórean sailor who eventually becomes a great warrior and king. In the movies, Isildur is portrayed by Harry Sinclair.