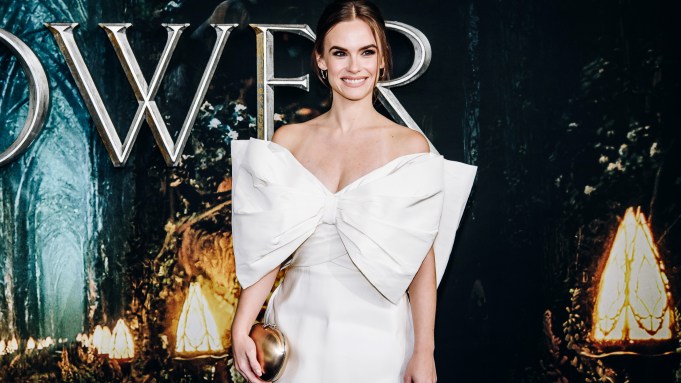 Ema Horvath is continuing her streak of fashion-forward moments.

On Tuesday, the rising actress attended the latest premiere of “The Lord of the Rings: The Rings of Power” at Film at Lincoln Center in New York City. She wore a cream taffeta strapless mini A-line dress by Pamella Roland featuring an oversize bow. She paired the dress with heels from Alexandre Birman.

She was styled by Sonia Young, who also works with Hannah Brown of “The Bachelorette,” Abigail Breslin and Maika Monroe.

Horvath is part of the main cast of the upcoming Prime Video series, which is a prequel to the blockbuster trilogies of “The Lord of the Rings” and “The Hobbit,” both of which are based on J.R.R. Tolkien’s books of the same name. The two were adapted into popular movies directed by Peter Jackson, accruing billions of dollars in total box-office revenue.

Horvath has been tapped to play Eärien in the show, which is set thousands of years before the events of “The Lord of the Rings” and “The Hobbit,” the latter of which is already a prequel to the former.

Eärien is Isildur’s sister and a character that was created for the series. Isildur, who will be played by Maxim Baldry, is a Númenórean sailor who eventually becomes a great warrior and king. In the movies, Isildur is portrayed by Harry Sinclair.

In 2017, Amazon purchased the television rights for “The Lord of the Rings,” making a five-season production commitment worth at least $1 billion, which makes it the most expensive television series ever made to date.