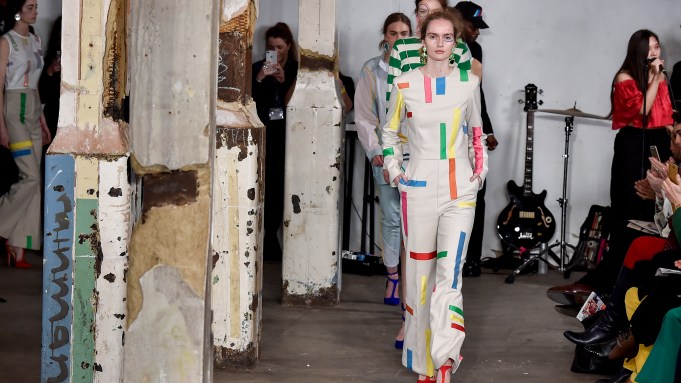 Taking cues from Rosalind Russell, the feisty, fashionable reporter who played opposite Cary Grant in the 1940 screwball comedy, “His Girl Friday,” Rooney offered a lovely wardrobe that oscillated between breezy weekend dressing and crisp workwear, in line with Russell’s character.

To wit, he paired a striped knitted sweater with a wonderfully light, silky slipdress and conjured a jumpsuit from a textured wool fabric donated to him by Christian Lacroix.

The group show quickly turned conceptual with Irving’s “army of alien showgirls,” as he called them. Cue corsets sculpted from plastic shards and matching headwear and zippy, sequined stretch bodysuits with inflatable spikes protruding from the back like a giant cosmic porcupine.

“I’m only 23,” Irving offered apologetically, “I don’t want to wash it down. I want to be more of an artist than a fashion designer,” he said. One could only picture Lady Gaga — an avid Irving supporter — sporting one of these.

They were accessorized with discarded metal poppers, which the designer said he started collecting off the streets. “I like the idea of repurposed industrial items that help clothes become something else,” he said of his signature scrap-metal designs. Here, they jibed well with the 25th-century theme.