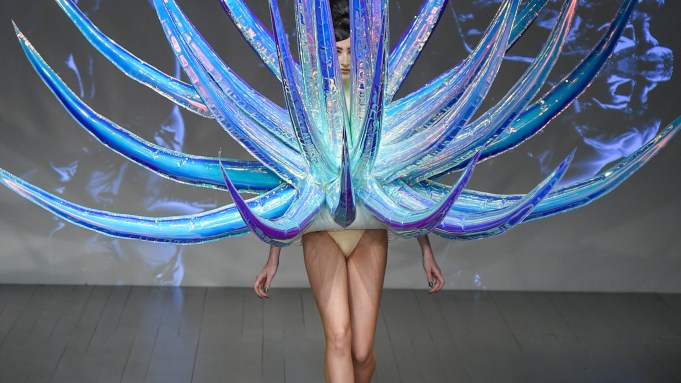 Included were Luke Anthony Rooney and Jack Irving, who staged their collections with On|Off last season, as well as Honest Man, Longshaw Ward and This Is the Uniform.

Among the highlights were Irving’s sculptural pieces, which continued to explore the manipulation of plastic shards into origami-like folds, adding texture to simple silhouettes including an elongated hoodie. Also included were bodysuits dripping with Mylar pieces that shimmered down the runway, as well as supersized silver Mylar spikes attached to inflatable rings that sat on the hips.

Another noteworthy collection was Joseph Standish’s label Honest Man, which was entirely made using ethically sourced materials. Standish’s man seems to be preparing for a post-apocalyptic dystopia with masked faces and protective outerwear. Some of his models wore backpacks on their chests while others carried mannequins sat at desks. Denim jackets were frayed and fused with other garments, transforming the familiar into something unexpectedly fresh.