Liudmila's designer Najeeba Hayat is also turning her attention to the U.S. market. 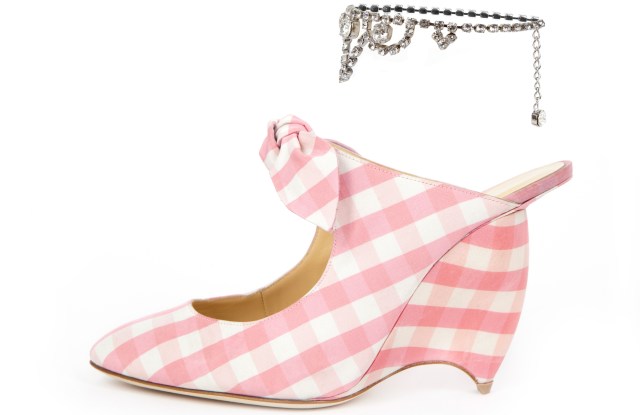 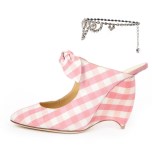 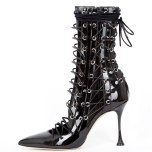 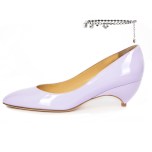 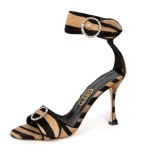 LONDON – The up-and-coming footwear label Liudmila has built a reputation on whimsical, fantasy-filled shoes that have been winning the attention of niche, curated boutiques around the world since the brand launched in 2013.

Its founder and creative director Najeeba Hayat’s latest project is a collection with Avigail Collins, the London-based stylist who works with Rihanna, Tinie Tempah and Jessie Ware, that launches on July 13.

The new collection channels both women’s love for the music icons of the Nineties, from Mariah Carey to Mary J. Blige. “We wanted that bling factor in the collection, so we kept the core shapes that represent my brand, simplified them and then applied these exaggerated materials like a giant tiger print or gingham,” said the designer, who is based in Kuwait.

One of the styles that Hayat has used are the Bibi pumps that feature a curved heel inspired by the Victorian era and are made from one single piece of material. “Part of the fantasy is the way that I create the shoes, not just that they are very artisanal, but the simplicity in the way they are made,” she said.

For her collaboration with Collins, the pumps were reinvented in pastel pink gingham or shiny lilac leather with detachable crystal anklets. Other styles include pointed-toe flat mules and sandals with heels and crystal-embellished brooches. Lace-up boots – one of the brand’s best-selling styles – have been recreated using tiger print and black patent leathers.

Prices for the range vary from 535 pounds, or $694, to 1,000 pounds, or $1,297, and will be stocked at stores including Browns, Level Shoe District Dubai, Penelope Brescia and the online retailer Aere.

The collaboration is part of Hayat’s efforts to expand the business, enter bigger markets such as the U.S., and add more commercial elements to the collections.

“The U.S. is a primary target for me as it is for all fashion accessories designers,” said Hayat, pointing to her company’s new efforts to increase her visibility on the red carpet and monitor her price points in order to keep up with the demands of U.S. department stores.

“In the past, I didn’t really take pricing into account or whether a shoe was practical. If I did something, I did it just because I really loved it, even if there was pretty much no way it was going to sell. Now I’ve changed tack and I’m much more aware of such factors,” said the designer. “I’ve taken into account that people might be a little bit more subdued, so I’m finding nuances of my style, which people can bring into their everyday wardrobes.”

Hayat said that she is also working towards launching her own e-commerce site and aims to see it grow to make up to 10 percent of the brand’s total sales. She’s also looking to expand in Asia, where she’s already seen strong interest. “To go big in China, we’d need much more investment,” added the designer, who has been self-funded for the last five years and has been taking advantage of a series of schemes for young entrepreneurs by Kuwait’s national fund.

Also in her plans is expanding her collection of accessories to include headwear, as well as ready-to-wear, in the more distant future.