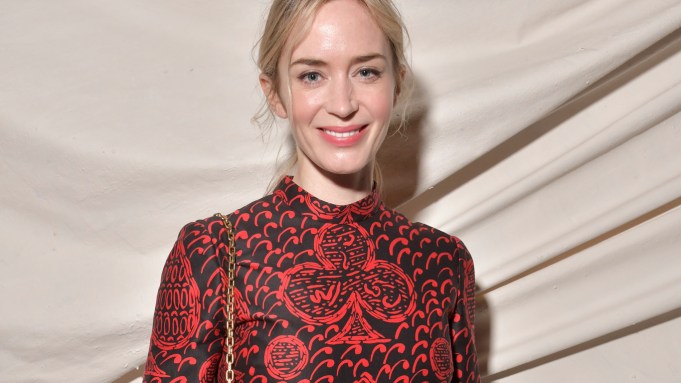 WEATHER GIRLS: The persistent rain did not slow down the Dior couture show on Monday, with guests including Emily Blunt, Monica Bellucci, Willow Smith, Naomi Campbell, Erin O’Connor and Alexa Chung turning out for the event.

Guests flowed through the Musée Rodin and across a vast black-and-white checkered floor on the site’s lawn to access the show venue, itself wrapped in a mirrored checkerboard design.

Blunt shared tips on how to stay groomed in the rain. “I don’t know if it’s glamorous, but someone encouraged me to wear one of those awful plastic bonnets, so I was like, maybe we should bring those back and make them glamorous again and not considered an old lady trait,” said the actress who is enjoying taking out time for motherhood. “I’m going to try to squeeze in some exhibitions tomorrow,” she said.

“Umbrellas and wellies — wellies are glamorous, they really are,” said Arizona Muse, who revealed she’s working on a project for London Fashion Week with The Sustainable Angle, a not-for-profit organization that initiates and supports projects geared to minimizing the environmental impact of the fashion industry.

“We’re going to present a showcase demonstrating what designers can make using sustainable fabrics we source. I’ve selected the designers, and I’m also creating garments to go in the show, some dresses,” she said.

Sweeping in on the arm of Antoine Arnault, Natalia Vodianova said her Elbi app “for philanthropic giving” has been featured by Apple. “We’ve also just launched ElbiDrop, an extension of the LoveShop, starting today. We have a week with Louis Vuitton and every day whoever raises the most LoveCoins — the currency of our app — is going to get very exclusive items from Vuitton. Some of them are bestsellers and some are pieces that you can’t buy anymore,” she said adding that she has similar collaborations coming up with Off-White and Messika.

Inside the tent, Haley Bennett was taking in the show venue’s Surrealist decor, meanwhile, with giant white hands, torsos, eyes and ears suspended from the ceiling. “It seems to be parts of a woman’s anatomy, so I’m looking forward to seeing how that relates to the fashion,” said the actress who has just wrapped filming “The Red Sea Diving Resort,” in which she stars opposite Chris Evans, and is set to start work on an independent film called “Swallow.”

Monica Bellucci, who revealed that her next project is a feature film with Israeli director Eran Riklis, was also impressed by the set. “It’s amazing, no,” she purred. “There is nothing better than body talk.”