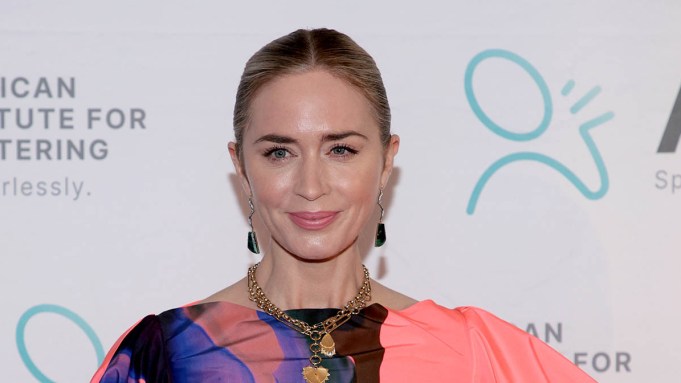 Emily Blunt made a stylish entrance for her latest hosting gig.

The British actress wore a pink print long-sleeved puff dress by Roksanda from the label’s fall 2022 collection to attend the 2022 Freeing Voices, Changing Lives Gala hosted by the American Institute for Stuttering. She styled her hair in a ponytail to show off her drop earrings and statement gold necklace by FoundRae and wore black open-toed heels.

She was styled by Jessica Paster, who also works with Christina Ricci, Miranda Kerr and Maria Bakalova.

As one of the acting board members for the institute, Blunt was tapped to host the event, which was held at Guastavino’s in New York City. The gala raises money to support their mission of providing free or low-cost therapy to people who stutter requiring financial assistance.

Blunt has been open about her difficulties with stuttering in the past, crediting a teacher that helped her manage her stutter through acting.

She joined the board for the American Institute for Stuttering in 2012, finding similar ways to help young people cope with their stutters.

After gaining wide recognition for playing Emily Charlton in the cult classic “The Devil Wears Prada,” starring alongside Meryl Streep and Anne Hathaway, Blunt has starred in some of the biggest movies, such as “Edge of Tomorrow,” “Sicario,” “Mary Poppins Returns” and the “A Quiet Place” films. Her role in “The Devil Wears Prada” earned her a Golden Globe nomination for best supporting actress in a motion picture.