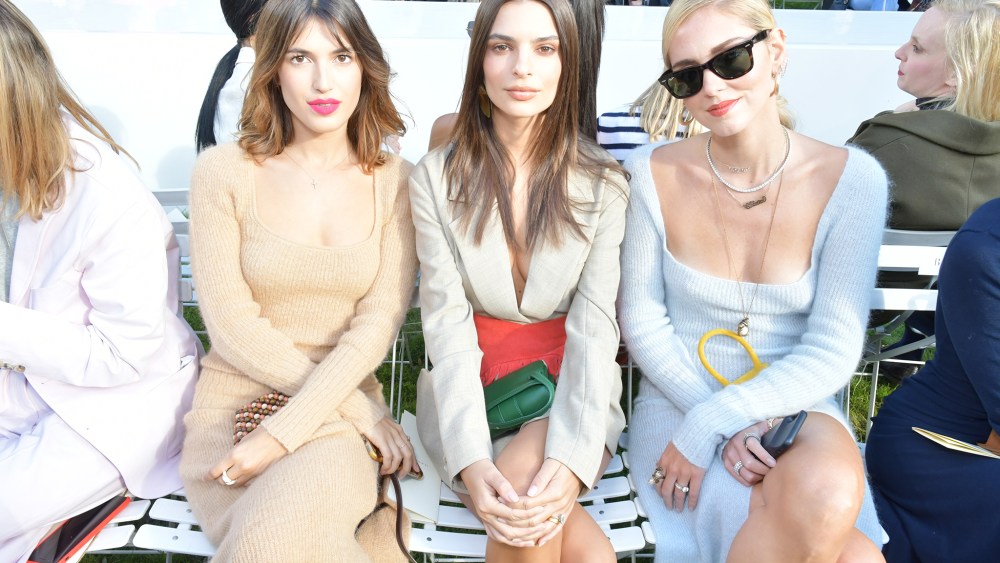 Despite the show’s theme being “La Riviera,” the weather wasn’t quite Côte d’Azur at the Italian Embassy in the 7th arrondissement, where the Jacquemus spring 2019 show was soon to take place.

“I’m freezing,” said Inès de la Fressange, hugging her black corduroy jacket around her shoulders as she entered the courtyard.

She hopped over to her friend and fellow Parisienne Caroline de Maigret, marveling at her choice of a plunging black silk jumpsuit in this chilly weather. Both women have become ambassadors of Parisian style, having each written a book about the art of the true Parisienne.

De Maigret, who featured in Simon Porte Jacquemus’ second collection six years ago, said it was the designer’s communicative energy that led her to collaborate with the brand. “He had really great ideas. I was hooked from the very beginning,” she said. “Years later, he still has the same incredible energy.”

Out in the back garden, Emily Ratajkowski was sipping a glass of Champagne and also praising the 28-year-old designer’s sunny nature. “I met Simon a year ago at his last spring collection, and I now have a friendship with him. Each of his shows celebrate women, and he has a really European, sexy approach that I relate to and love to wear.”

The actress had landed merely an hour ago from Milan, where she walked the Versace and Dolce & Gabbana shows. Will she be walking any shows in Paris? “It’s a surprise. I can’t tell you,” she smiled.

In the garden of the embassy, guests were seated on white folding chairs. Influencer Jeanne Damas was spotted taking a selfie with Ratajkowski in the front row. She was perched a couple of seats along from designers Jean Touitou of APC and Gaia Repossi.

It was the Haim sisters’ first Jacquemus show, and the trio of musicians was visibly psyched. “We’re so excited, we’re really big fans. As you can tell,” they cooed, gesturing to their head-to-toe Jacquemus looks, complete with miniature bags.

The only exception being jewelry: Alana, Danielle and Este Haim chose oversize brass hoops by Brooklyn jewelry designer Laura Lombardi, who they find “so good.”

“Danielle found him first, and got us all hooked,” said Alana of Porte Jacquemus. “He makes women feel so beautiful, and all his clothes are so flattering. This outfit right now?” She signals her black knitted transparent top, apparently unfazed by the breeze. “I could only wear this because it’s Jacquemus. I’m obsessed.”

The band is planning to do a couple of fashion shows in Paris, but is aiming to keep things relaxed. “We’re just partying and having a good time,” said Alana.

The trio is taking a small break from working on new music. “Something is definitely in the works. Hopefully we will put it out really soon.”