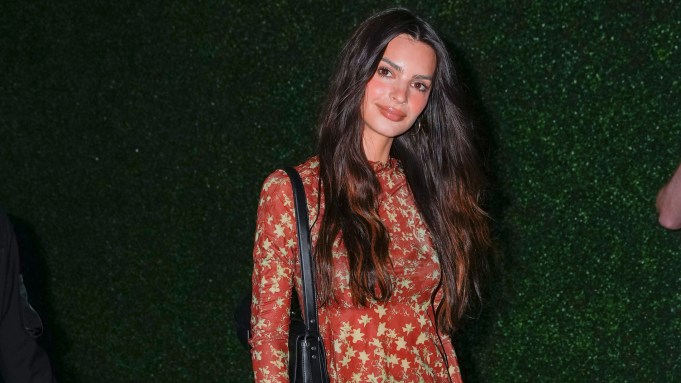 Emily Ratajkowski had a standout fashion moment during her visit to the U.S. Open in New York.

On Wednesday, the model-turned-author arrived at the coveted tennis tournament wearing a two-piece, semi-sheer star-printed set by Knwls, created by Charlotte Knowles. She paired the look with pointed black booties and a black shoulder bag.

She styled her hair in loose waves and kept her makeup simple.

The two sipped on espresso martinis as they sat in the Grey Goose Suite, along with David Harbour of Netflix’s “Stranger Things” and his father Kenneth Harbour.

Ratajkowski uploaded snippets of their night in a short video shared on TikTok, a social media platform she has become more active on as of late.

A slew of celebrities have come out to watch the U.S. Open this year, mostly due to Serena Williams’ impending retirement from tennis after the tournament.

Last month, the tennis legend revealed in an article she wrote for Vogue that she would “evolve away” from the sport after the 2022 U.S. Open, hinting at retirement.

She penned she “never liked the word retirement” and prefers to use “evolution” in terms of what’s in store for her for the future, which includes potentially growing her family and business ventures. Williams also has a sustainable clothing line called S by Serena, inspired by ‘90s streetwear.