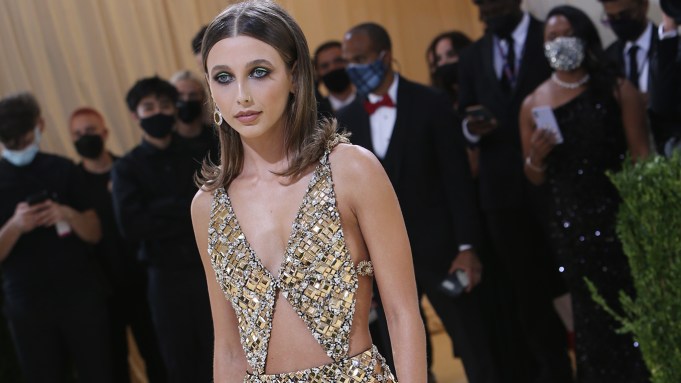 Emma Chamberlain, one of the biggest social media stars of this generation, turns 21 today.

Not only has she climbed the ranks on platforms such as YouTube, Instagram, TikTok and more, she has also emerged as a fashion icon in her own right.

In recent years, Chamberlain has worked very closely with Nicolas Ghesquière, Louis Vuitton’s creative director for the women’s collections, attending the label’s shows in Paris frequently as an ambassador.

With the help of her stylist Jared Ellner, Chamberlain has taken on some of the most exclusive events of the year, such as the Met Gala and the Vanity Fair Oscar Party, wearing designs by Louis Vuitton and more.

“​​She has unbelievable style. She’s truly a dream client and person to work with because she has such a good sense of her own style and a good eye that it makes working with her effortless,” Ellner told WWD. “I’m such a fan of how she puts herself together already, so being asked to help with that was the best possible dream job I could’ve ever asked for.”

Chamberlain was one of the first stars to embrace the resurgence of trends from the late ‘90s to early Aughts, managing to mesh pieces like a vintage Paul Frank or Von Dutch crop top and low-rise cargo pants with Louis Vuitton loafers. With that, Ellner simply leaned into her sense of fashion and helped elevate it.

“She looks timeless, no matter what she does, I feel like she has a very good ability to wear new things and vintage things and make it all look classic,” Ellner said. “She reminds me a lot of early ‘90s fashion. She can pull from a lot of different references. She always tends to make something look very natural, so it can go a million different ways because she’s super adaptable.”

Since stepping onto the scene with YouTube as a 16-year-old, the social media star has launched her own entrepreneurial ventures, including her own coffee company, Chamberlain Coffee, and served as creative director of beauty line Bad Habit Beauty. Most recently, she has was named an ambassador for Cartier, wearing pieces from the French luxury jewelry for the 2022 Met Gala.

Click through the gallery above to see some of Emma Chamberlain’s most stylish moments over the years.

A Day at Louis Vuitton With Emma Chamberlain