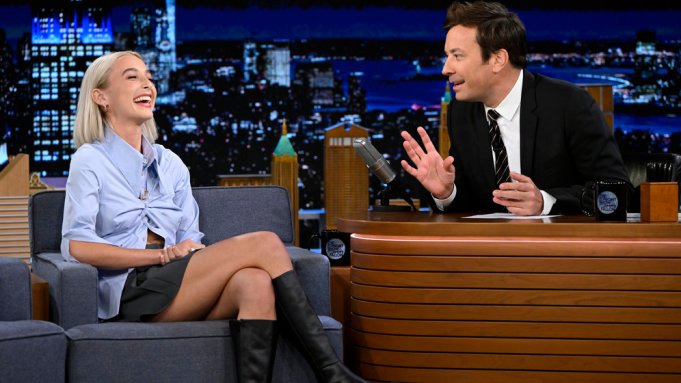 Emma Chamberlain has made her talk show debut.

On Wednesday, the YouTuber appeared on an episode of “The Tonight Show Starring Jimmy Fallon,” where she explained her reaction to her fun exchange with Jack Harlow at the 2022 Met Gala.

“When I’m doing these interviews, it’s blank up here,” Chamberlain said, gesturing to her head. “Like, I have no thoughts, and when I go home and I watch the interviews again, I’m like watching a completely different person. I have no idea. I’m not thinking about anything. And then I’m reacting to myself.”

The host first brought up the topic since the rapper was recently on his show last month. He first brought up the clip of the interview she did with Harlow for Vogue at the coveted event, where in the midst of saying goodbye, the artist nonchalantly told her he loved her, to which she looked back toward the camera and started laughing.

Then another video was shown of Harlow explaining what happened.

“That’s like a piece of art because there’s so many ways to interpret that, you know what I mean?” Harlow said back in May. “Everyone has a different take on what was going through their head, so I’ll leave it up to interpretation.”

“But do you leave every interview saying love you?” Fallon asked.

“Only if I love them,” Harlow responded.

For the segment, she wore a shirt by Saint Sintra, which was button-down with ruched detailing and an oversize collar, and gray miniskirt by The Frankie Shop, paired with chunky black knee-high boots from Unif.

She was styled by Jared Ellner, who also works with the likes of Cazzie David, Claudia Sulewski and Rachel Anne Sennott.

Chamberlain did interviews for Vogue for this year’s and last year’s Met Gala. For both events, she wore looks by Louis Vuitton, for which she is a brand ambassador. She has worked closely with Nicolas Ghesquière, the brand’s creative director for women’s fashions, for the last few years, frequently attending the shows in Paris.

This week, Chamberlain went viral on Twitter for returning to YouTube after a six-month hiatus. She posted a vlog of herself exploring New York City.

Since stepping onto the scene with YouTube as a 16-year-old, the social media star has launched her own entrepreneurial ventures, including her own coffee company, Chamberlain Coffee, and served as creative director of beauty line Bad Habit Beauty. Most recently, she was named an ambassador for Cartier, wearing pieces from the French luxury jewelry for the 2022 Met Gala.