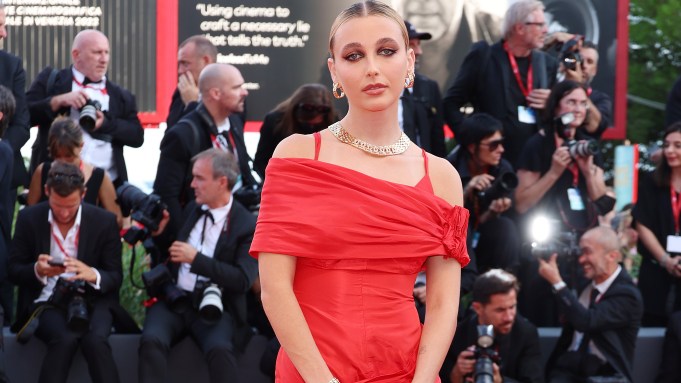 Emma Chamberlain has arrived at the Venice Film Festival.

On Wednesday, the YouTuber walked the red carpet for the premiere of “White Noise” during the Venice Film Festival’s Opening Gala. She wore a red ruched gown by Valentino from the label’s fall 2007 collection that featured sash detailing on the shoulders and hips. She topped off the look with jewelry by Cartier and the Cloud clutch from Jimmy Choo.

She styled her blond bob hair in a short ponytail and rocked bold eye makeup with a nude lip.

She is usually styled by Jared Ellner, who also works with the likes of Claudia Sulewski, Rachel Anne Sennott and Phoebe Bridgers.

Also present at the premiere were the cast members of “White Noise,” including Adam Driver, Greta Gerwig, Jodie Turner-Smith and Don Cheadle, among others.

The dark comedy film, directed by Noah Baumbach, is adapted from the 1985 novel of the same name by Don DeLillo and is scheduled to premiere on Netflix starting Dec. 30 after a limited theatrical release on Nov. 25.

In recent years Chamberlain has emerged as a fashion star, particularly among Gen Z as she embodies the resurgence of Y2K trends as well as incorporating modern styles.

She has worked very closely with Nicolas Ghesquière, Louis Vuitton’s creative director for the women’s collections, attending the label’s shows in Paris frequently as an ambassador. She is also an ambassador for Cartier.

With the help of her stylist Ellner, Chamberlain has attended some of the most exclusive events of the year, such as the Met Gala and the Vanity Fair Oscar Party, wearing designs by Louis Vuitton and more.