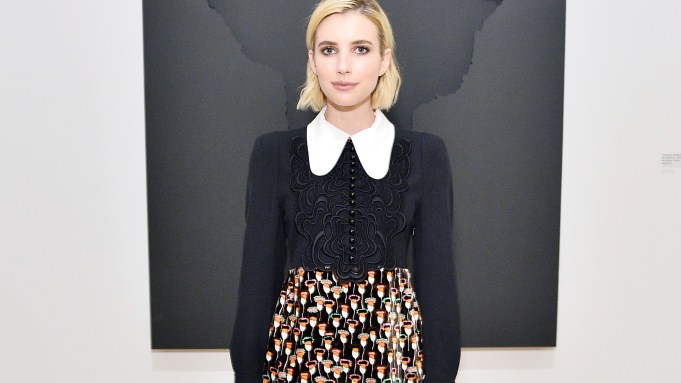 “To quote my favorite Oscar Wilde line, ‘You can never be overdressed or overeducated.’ That is why Chloé and MOCA came together,” said Museum of Contemporary Art director Philippe Vergne on Tuesday, when the brand and the museum hosted their third annual dinner.

This year, the event celebrated the recent opening of the Anna Maria Maiolino exhibition at MOCA’s Grand Avenue site. Vergne gave a private tour to guests including Emma Roberts, Aimee Song, Chloe Norgaard, Courtney Trop, Estee and Danielle Haim, Kelis, Kelly Rowland and Thomas Jane. The exhibit includes Maiolino’s early prints, as well as her sculpture and photography. The pièce de résistance was a room filled with unbaked clay sculptures, including a giant wall covered in dots of clay. “Maiolino has this idea of always needing to put something on the table, and to put objects between her and the viewer,” Vergne explained.

Outside the gallery, he paused to introduce a work by another artist, a ping pong table with a lily pond in the middle. The notion of playing games and provoking conversation proved true as Roberts and her stylist Britt Elkin decided to play. The catch-22 was that no one can win the game, as the ball always ends up in the water.

Afterward, guests were invited to the rooftop terrace to enjoy a dinner by chef Tess Ward who flew in for the evening from London. The gluten-free menu included California produce such as squash blossoms and tamarind figs as well as coconut ice cream. The night capped off with a live performance by Los Angeles-based band, Winter, whose lead singer, pink-haired Samira Winter, dedicated their last song to Chloé as well as her cat, Zoe, causing one guest to shake her head and say, “I just don’t get those Millennials.”