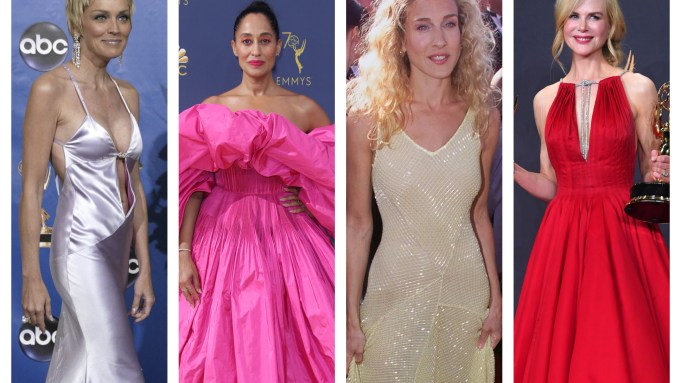 With every awards season comes a slew of new red-carpet looks that resonate with the cultural lexicon.

As the 2020 awards season begins with Sunday’s Emmy Awards, it’s worth looking back at the Emmy red-carpet looks that have stood out over the years. While the Emmys may be on a smaller scale compared to the Oscars or Golden Globes, the awards show has consistently attracted A-list stars.

In the late Nineties and early Aughts, actresses like Sarah Jessica Parker, Jennifer Aniston and Julia Louis-Dreyfus routinely brought the glamour to the Emmys red carpet in looks by Giorgio Armani, Chanel and Dior that reflected the era’s trends, like slipdresses, spaghetti straps and neutral hues.

Recently, some of Hollywood’s buzziest actresses have made their Emmy debuts, including Tessa Thompson of HBO’s “Westworld,” who attended the awards show in 2017 in a metallic rainbow Rosie Assoulin dress.

“Honestly this felt like a dress I had never seen before,” she told WWD on the red carpet. “And it’s really hard to find that on a red carpet because you end up going through the carpets of past years and you have this idea of what you ought to look like, but I just have to remind myself that what I’m always attracted to are people who seem to break rules. These are the Emmys, it’s the time to dress up and feel the way you want to feel.”

Click through the above gallery to see more memorable Emmys red carpet looks of all time.

5 Takeaways from the Creative Arts Emmys 2019