The Greene Street shop will showcase the Eric Emanuel x Adidas basketball collection along with its eponymous apparel and accessories.

Eric Emanuel has taken the plunge into physical retail.

The New York-based streetwear designer will open an EE concept store at 91 Greene Street in SoHo that will showcase his eponymous apparel and accessories along with the Eric Emanuel x Adidas basketball collection for the McDonald’s All American Games — the first of several collaborations planned with the sporting goods giant this year. Emanuel designed the uniforms for the games, which are being offered to the public beginning Friday at the new space as well as on the Adidas e-commerce site next week.

”As a designer, Adidas was one of my earliest believers,” said Emanuel. “Over the past three years, each of the collections we’ve created together have centered around basketball culture. In the last year Adidas has made great strides and is innovating in the basketball market — it’s been amazing to play a role in that, and I’m excited for you all to see the future of Adidas hoops.”

“We are pleased to work with Eric Emanuel, an incredibly talented creator, whom we have admired for many seasons. And we are even more excited to present our first basketball-focused collection together, in partnership with the McDonald’s All American Games, which brings a fresh perspective and new energy to the court,” said Eric Wise, general manager of Adidas Global Basketball.

Emanuel tested the retail waters in the summer of 2019 with a pop-up shop in New York City, but decided to take the plunge into a permanent space when the space that formerly housed A Bathing Ape became available. The shop, which has 2,000 square feet of selling space, will also offer exclusive and limited-edition collaborations with Major League Baseball and others, and plans on hosting experiential performances with special musical guests, and installations with local artists. It will also sell a new collection of EE lifestyle products including homewares such as candles created by New York-based Joya; leather coasters and accessories from Park Avenue Trimming, and hand-woven rugs created in Nepal by Brooklyn-based Noreen Seabrook. 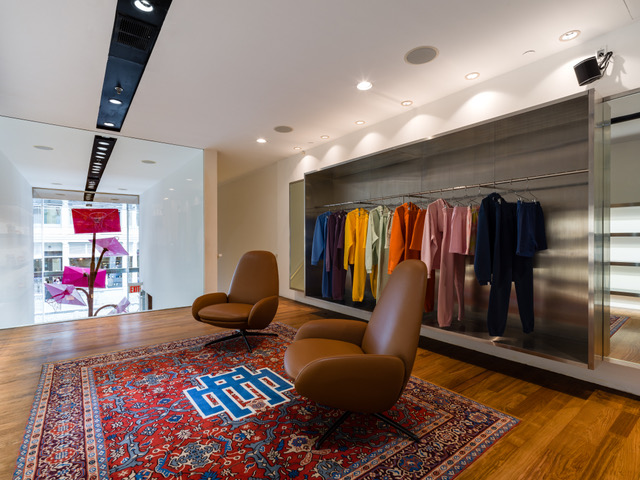 The EE Concept Shop is on Greene Street.  Mo Daoud

Local artist New York Sunshine custom-built the two-story sculpture displayed in the front window as well as a row of vintage-inspired lockers that line the first floor of the shop.

In addition to the store launch, Emanuel will partner with the Fashion Scholarship Fund by creating an EE x FSF limited-edition capsule collection designed in collaboration with select FSF scholars. Proceeds from the sale of the line will go toward funding future scholarships for students.

Emanuel, who attended the Fashion Institute of Technology, became known for his custom python basketball jerseys that were popular with Travis Scott, Future and others. Since then, the designer has carved out a niche with his EE mesh shorts as well as his ongoing sneaker and apparel collaborations with Adidas, Reebok and New Era.