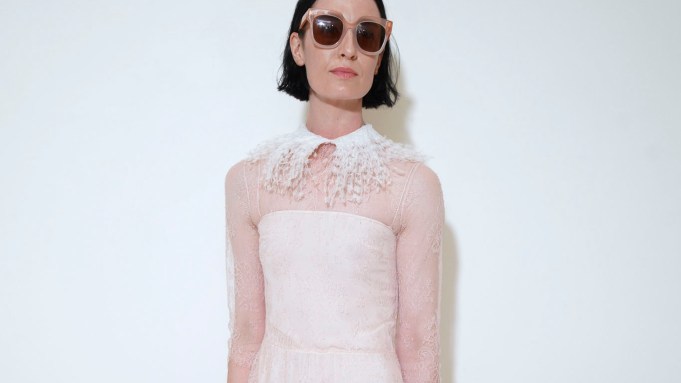 ALL WHITE: Stepping into the venue of the Dior couture show on Monday, set in the grounds of the Musée Rodin, guests including Katie Holmes, Emma Roberts and Erin O’Connor got to take in a tribute to the Dior atelier. Showcasing dressmaking mannequins in the 294 toiles that gave life to the outfits in the collection, the all-white floor-to-ceiling display was reflected in huge ceiling mirrors.

It had a soothing effect on the show attendees.

“I feel like we’re in a cloud of amazing fashion and couture; it’s really beautiful,” said British actress Annabelle Wallis, whose upcoming projects include “Sleeping Dogs Lie,” in which she will star alongside Garrett Hedlund.

Shooting in the U.K., the movie, due out early next year, is “a sweeping epic romance set in the 1800s,” she said. “Anything that’s a human story is just so pivotal now. I think people want to connect; there’s so much going on that a simple human story is very powerful.”

DJ Mia Moretti commented on the experience of passing through the museum — with all the old Auguste Rodin sculptures — and entering into “this super-modern room.”

“It brings a little solace; it’s very peaceful. With the world right now it’s nice to be in a room that is peaceful and calm….it’s light and bright,” said the actress. Next she’ll be traveling to Arles to check out the “Dior, the Art of Color” exhibition, which opened Monday, before heading off to South Africa on tour later this month. “It’s one of my favorite cities in France and it’s just a gem, a hidden treasure, and it feels like you’re stepping back in time,” she said of Arles.

Running her eyes along the rows of mannequins encased within the walls, Kathryn Newton recalled spotting the toile for the gown she wore to her first Dior show in the final room of the recent “Christian Dior: Couturier du Rêve” retrospective at Les Arts Décoratifs, which served as the inspiration for the set.

“It made me really happy,” she said. “I tried on so many outfits, and on that day they let me go through everything, and I found that dress,” said the American actress, who has just finished filming the Pokemon live-action movie “Detective Pikachu” and the second season of hit HBO series “Big Little Lies.” “It wasn’t part of the collection; it was one in the archives. It might have been vintage, it could have been a year old, I don’t know, but it was the one.”

Also taking in the display, O’Connor said that she’s had to get over her fear of sewing, “because I’ve been in the hands of the most talented seamstresses my entire life.”

“I came a cropper recently because my son started school in September and we had to hand-stitch his name in every single item of clothing,” said the model, who also shared anecdotes of walking in the Schiaparelli show earlier in the day.

“It was a huge personal feat for me because I’ve always loved Elsa Schiaparelli — in fact I literally wore her on my dress this morning,” said O’Connor, who on the runway had stepped in to scoop up a model in a dog mask who had taken a tumble.

“I picked her up; my motherly instincts kicked in. Especially with all those dead lift weights I’ve been doing, I took her under both shoulders. She was up in about 1.5 seconds.”

Camille Rowe, the face of Dior’s Poison Girl scent, isn’t much of a needle-and-thread type, either. “I can sew a button on,” offered the model-cum-actress, who’ll be heading to Los Angeles next week to continue filming Ryan Daniel Dobson’s “Hosea,” starring opposite Avi Nash.

“It’s a love story about two ego-narcissist artists that can’t seem to figure it out. I’m literally doing this movie and I was like, maybe I should learn from it?”