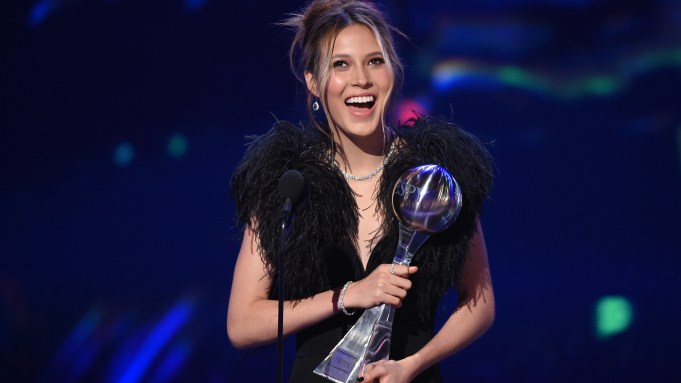 Eileen Gu had a standout fashion moment at her first ESPY Awards.

On Wednesday, the skier walked the event’s red carpet wearing a black jumpsuit with feathered shoulders by Elie Saab from the label’s pre-fall 2022 collection. She paired the look with a black clutch by Louis Vuitton and jewelry by Tiffany & Co.

Her maternal grandmother, Feng Guozhen, joined Gu for the event.

The American-born Olympian was nominated for Best Breakthrough Athlete and Best Female Action Sports Athlete, both of which she won.

Gu made waves earlier this year when she won three medals for China at the 2022 Beijing Winter Olympics, including two golds for the big air and halfpipe events and a silver for the slopestyle event.

At 18, she became the youngest Olympic champion in freestyle skiing.

Even before her debut at the Olympics, Gu had fronted the campaigns for up to 23 brands in China, across fashion, sports and banking.

Represented by IMG Models, she is also a brand ambassador for Tiffany & Co. and Louis Vuitton, wearing the latter’s designs frequently and attending its events and shows. Most recently, she walked the Louis Vuitton cruise 2023 show at the Salk Institute in San Diego, California.

This fall, the skier will begin her studies at Stanford University, her mother’s alma mater.

Gu’s decision to switch from Team USA to China drew international attention. Gu was born in San Francisco to a Chinese mother and American father. She has reportedly declined to disclose her citizenship, previously identifying both as American and Chinese.