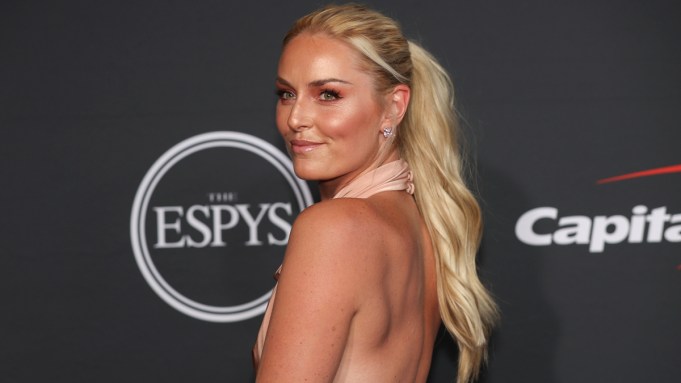 Alpine ski racer Lindsey Vonn shed her competitive winter-wear to attend the 2022 ESPYS on July 20 in Los Angeles. The 37-year-old Olympian walked the red carpet in a peach gown with statement-making details.

Vonn wore a fitted halter dress with a draped neck, kick hem and mid-thigh slit at the back. The look featured a low V-shaped opening at the back with a bunched detailing. Vonn wore the dress with a pair of white stiletto sandals that were hidden under the floor-skimming hem.

Vonn wore her long blond locks in an effortless wavy ponytail, which showed off her diamond stud earrings. She also wore a collection of gold diamond bracelets, a gold watch and rings. Vonn carried a peach satin purse with a gold chain and gold clasp, which matched her dress. The sports star centered her makeup look around a glowing rosy palette with blushed cheeks, peach eyeshadow and a pink glossed lip.

Vonn, who retired from skiing in 2019, is best known for her time with the U.S. Ski Team and her four World Cup championship titles. She has also partnered with Under Armour on a line of outdoor performance gear. The athlete also released a winter sportswear line with Head, the ski brand she was sponsored by during her prolific career. Vonn also has her hand in high fashion, modeling designer Thom Browne’s FW 2021 collection in a film that featured her skiing down the slopes in couture.

The ESPYS, or the Excellence in Sports Performance Yearly Awards, is an annual ESPN award show celebrating outstanding achievements in sports. This year’s show will be hosted by NBA superstar Curry, with award recipients selected by sportswriters, broadcasters, sports executives, and players as well as fan voting. The biggest awards of the night are Best Men’s Sport Athlete and Best Women’s Sport Athlete, along with Breakthrough Athlete and Best Record-Breaking Performance.