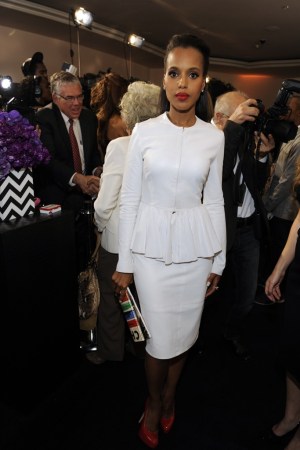 ESSENCE FETES OSCAR NOMINEES: In the midst of the pre-Oscar frenzy of events and parties, Essence Magazine held its 5th annual Black Women in Hollywood luncheon, presented by Lincoln, on Thursday at the Beverly Hills Hotel. This year’s honorees were Kerry Washington, Paula Patton, Shonda Rhimes, Octavia Spencer and Pam Grier. “We support and nurture each other all the time, but this is the one time of the year that we get to really celebrate each other,” said Debra Martin Chase, the producer of “Sparkle.” Washington said she experienced that encouragement last year when other actresses at the luncheon had just found out she had won the role they all auditioned for—the lead in Rhimes’ new TV show “Scandal.” “I didn’t feel that there was any competition in the room,” said Washington. “I left with you in my heart.” According to Patton, diversity in Hollywood is “better, but we’ve got a long way to go. If I slipped through a crack in the door, then it’s my responsibility to hold that door open and make it easier for those to come.” The support was apparent for Spencer and Davis, both nominated for Academy Awards for “The Help.” “I know their journey and it’s not easy,” said Patton. Spencer admitted that she’s been too busy getting ready to shoot her next film and she hadn’t given much thought to the Oscars until Wednesday night, when she had a “freak out” moment. “I didn’t think there was a snowball’s chance in hell that I would ever win an award. It really and truly is an honor just to be nominated.” Davis, who also admitted to some pre-Oscar jitters, presented her friend and co-star Spencer with the breakthrough performance award. “Your heart is as big as your talent,” Davis told her.