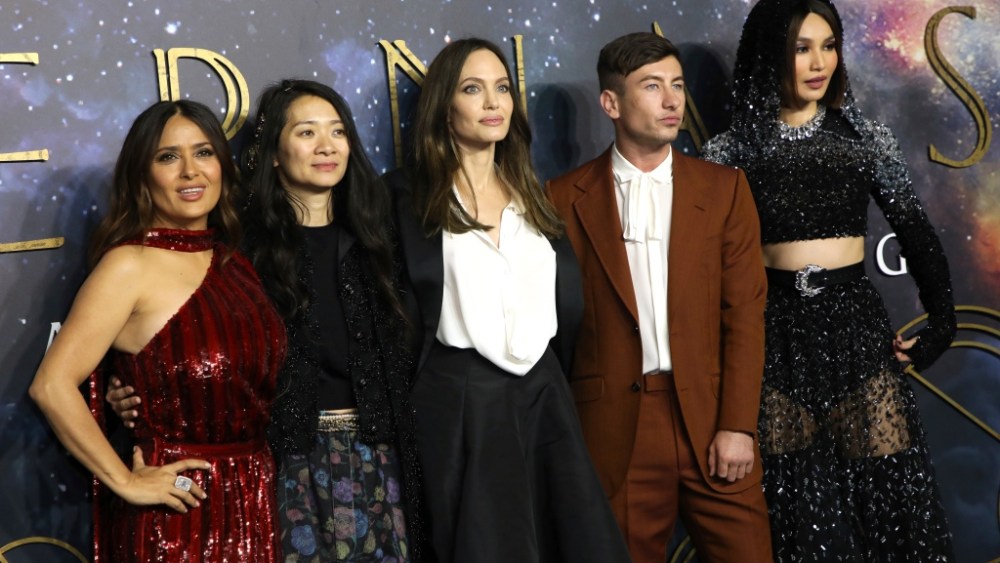 The “Eternals” press tour has seen several high-fashion moments from the global premieres and events that have taken place over the last few weeks.

The film’s star-studded cast, including Angelina Jolie, Gemma Chan, Kumail Nanjiani, Salma Hayek, Richard Madden and Kit Harington, among others, have taken part in the film’s press tour in several standout looks from design houses like Chanel, Louis Vuitton, Valentino, Balmain and others.

Jolie, for one, has had a breakout style moment during the “Eternals” press tour. The Oscar-winning actress started off the press tour at the Los Angeles film premiere on Oct. 18 wearing a taupe-colored draped dress from Balmain’s resort 2022 collection, which she paired with vintage Tiffany & Co. jewelry. She attended the premiere alongside five of her children, who matched the actress in neutral-hued, monochromatic outfits. Two of her daughters looked to pieces in Jolie’s closet for the premiere, with Zahara Jolie-Pitt wearing the same Elie Saab silver fringe dress Jolie wore to the 2014 Oscars and Shiloh Jolie-Pitt wearing a beige Gabriela Hearst dress the actress wore this summer.

She then attended the film’s premiere during the 2021 Rome Film Festival in a custom Atelier Versace platinum dress designed in a heritage metal mesh featuring a column silhouette and a draped corset.

In London, Jolie attended the “Eternals” photo call in one of her most memorable looks from the press tour: a gold brocade gown from Valentino’s fall 2018 couture collection. She later changed into another Valentino look for that night’s premiere, this time wearing a custom white blouse under a black blazer paired with a flowing black skirt.

Zhao, the film’s director, looked to Chanel for the press tour. The Oscar-winning director wore a two-piece floral look from Chanel at the Los Angeles and London premieres. She also wore a multicolored, tweed embroidered coat dress from Chanel’s Métiers d’Art 2020 collection at the Rome Film Festival.

Click through the above gallery to see more of the standout fashion during the “Eternals” press tour.

The Standout Looks from the 2021 Rome Film Festival