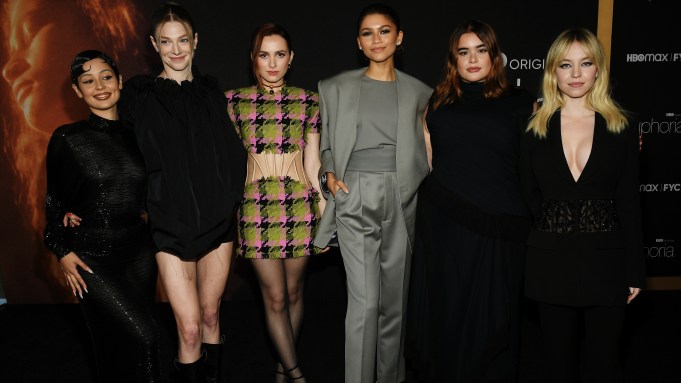 The buzz around “Euphoria” doesn’t seem to be waning.

On Wednesday night, the cast of the hit HBO teen drama came together at the Academy Museum of Motion Pictures in Los Angeles for a For Your Consideration event prior to Emmy nominations coming out this summer. The event reunited the show’s cast including Zendaya, Sydney Sweeney, Alexa Demie, Hunter Schafer, Maude Apatow, Barbie Ferreira and more, who all attended in an array of standout fashion looks from brands like Versace, Prada and Alexander McQueen to name just some.

Zendaya, known for always making a statement on the red carpet, went with a menswear-inspired look for the event. The Emmy-winning actress wore a gray, fitted suit from Fear of God’s fall 2022 ready-to-wear collection, paired with Bulgari High Jewelry earrings and rings.

Demie paid homage to season two of “Euphoria” — which concluded earlier this year — with her look, wearing a vintage Norman Norell mermaid dress similar to the one her character is gifted by her boss. Demie’s dress was sourced from Aralda Vintage, which also provided all of the vintage pieces seen in the season’s second episode during the scene where Demie’s character Maddy tries on unique pieces from her boss’ vintage collection.

On the more colorful side, Apatow looked to Versace’s fall 2022 rtw collection, wearing a green and pink houndstooth print dress.

While it’s been a few months since “Euphoria” aired its second season, the show is still resonating with fans thanks to its fantastical fashion and bold beauty looks. Each episode was responsible for spiking fashion searches related to its costumes, such as the first episode where Demie’s character’s black cutout dress resulted in a search increase of 890 percent for the garment, according to fashion e-commerce aggregator Love the Sales.

Ahead of the second season’s finale, Twitter revealed that “Euphoria” is the most tweeted about TV show in the U.S. this decade, with 30 million tweets since January.

“Euphoria” has been renewed for a third season, however, the show has not revealed when it will return.