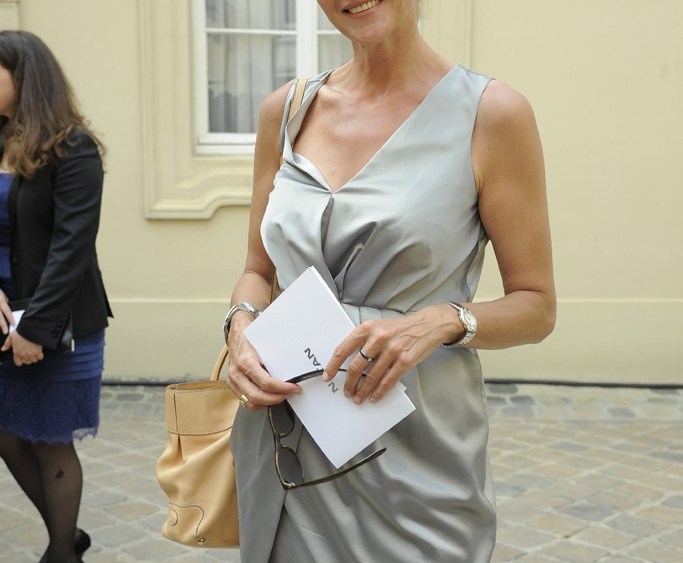 ROYAL AFFAIR: It wasn’t the usual fashion set — but then Edouard Vermeulen is not your average designer.

Vermeulen, who is considered the official couturier of the Belgian royal family and dresses the princes and princesses of the Dutch and Swedish crown, presented his 30th-anniversary Natan collection at the Belgian Embassy in Paris on Monday evening to guests including Princess Léa of Belgium, former French first lady Bernadette Chirac, Henri d’Orléans and Prince Pierre d’Arenberg and his family.

Stéphane Bern, a journalist and expert on Europe’s royal family, said he was pleased to see Vermeulen showing in Paris, where the designer is relatively unknown. “Most of the stuff we see at fashion week is unwearable; for once, we are seeing something that people can wear. It’s important,” he said.

Belgian actress Alexandra Vandernoot, who just finished a run of the play “Cher Trésor” alongside veteran French actor Gérard Jugnot, said she often wears Natan for her roles. “He designed six costumes for me for ‘Cher Trésor,’ and I assure you that I was the best dressed on the stage,” she said.

Canadian actress Gabrielle Lazure was taking inspiration from the regal crowd for her next role as the mother of Princess Laetitia d’Arenberg.

“I see there are some d’Arenbergs here. I don’t know if they’re related, but I assume so,” said Lazure, who has just finished filming “Passer l’hiver,” a movie by director Aurélia Barbet, in which she stars alongside Isabelle Huppert’s daughter, Lolita Chammah.