Eva Mendes was overcome with emotion while discussing her work with The Art of Elysium. Also in today's scoops: David Beckham visits Selfridges. 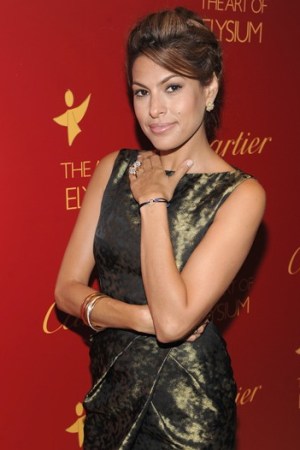 SO EMOTIONAL: There was so much love in the room at the Cartier Love Day press conference on Thursday morning that several people even burst into tears. “Thank God for waterproof mascara,” said Eva Mendes, who was overcome with emotion in a Michael Kors sheath when discussing her work with The Art of Elysium, an organization that encourages working actors, artists and musicians to voluntarily dedicate their time and talents to children battling serious medical conditions. “It’s so emotional to see the growth and results [of the children],” she added. Mendes is Cartier’s Love Charity Ambassador for The Art of Elysium. Cartier North America president and chief executive Frédéric de Narp and the charity’s founder Jennifer Howell were on hand, as well, to unveil a new Love Charity bracelet that went on sale Thursday benefiting 24 chosen charities, including The Art of Elysium. In the past three years Cartier North America has donated more than $4.5 million to 24 global charities. The new silk cord and rose gold bracelet comes in myriad colors corresponding to the respective charity. It sells for $700, and $150 from the sale of each will benefit the charity.

This story first appeared in the June 12, 2009 issue of WWD. Subscribe Today.

ROCK HUDSON: In an intersection of good jeans and good genes, Hudson Jeans has cast Georgia May Jagger, the youngest daughter of Jerry Hall and Mick Jagger, in its fall ad campaign. “Georgia is the new era of girl,” said David Lipman, who is helming the campaign. “A miracle like this comes around every 30 years.” Which is to say Lipman, who also serves as an operating partner in Fireman Capital, Hudson’s majority investor, sees the marketing magic in Jagger — so much so that Hudson signed her for three years. While she’s done a bit of editorial, this is the first ad campaign for 17-year-old Jagger, who has her mother’s blonde hair and bone structure. It’s also the first step in a major rebranding push for the Los Angeles-based premium denim label, which was founded in 2002. The shoot, photographed by Mario Sorrenti and styled by Camilla Nickerson, takes place this weekend in London (though Hudson is known for its Union Jack logo) and Lipman said the results will shift the traditional campaign paradigm. “It’s going to take the digital age and the print age and crash them,” he said, adding that print, online, viral video, outdoor venues and social networking will all be in the mix. As for the concept, the cameras will follow Jagger through her London life, including a trip to a club with her friends and boyfriend Django James of the band Django James & The Midnight Squires. “But it’s really about Georgia,” said Lipman. “She is going to take the world by storm. Mark my words.”

REASON TO DANCE: Students of the Martha Graham School of Contemporary Dance wowed attendees at the group’s annual luncheon Thursday at the Loeb Boathouse. Before the festivities got rolling, this year’s honoree, Lela Rose, admitted ballet was not her forte, but tap dancing is another story. The designer even took classes in college, where her instructor recommended students tap-dance down supermarket aisles when they went shopping to better measure their steps. “Needless to say, no one wanted to go with me to the grocery store in college,” Rose said with a laugh. One of her tablemates, Victoria Geduld, offered another incentive for spats — medical research suggests the skill helps stave off Alzheimer’s disease.

BECKHAM, UNFURLED: London police gathered outside Selfridges Thursday to keep in check the screaming crowds who’d gathered behind metal barriers to catch a glimpse of David Beckham. The English soccer star made a personal appearance for the unveiling of his latest Emporio Armani Underwear campaign for fall. He greeted fans outside as a giant campaign poster — picturing him slick-haired and wearing black briefs — was unfurled over Selfridges’ facade. And while Beckham clearly doesn’t mind posing half-naked for photographers, he told the British sports presenter Gabby Logan: “When the pictures are unveiled it’s a bit embarrassing.” The campaign, shot by Mert Alas and Marcus Piggott in Milan, is Beckham’s fourth for the label.

SUIT YOURSELF: Have you seen Glenn Close as a ruthless litigator in perfect power suits on “Damages”? Alber Elbaz has, and the television series helped inspire a new tailoring capsule collection he’s launching for pre-spring chez Lanvin. For authenticity, the looks are to be made in the same Italian factories where Lanvin’s men’s wear is produced, he said. Continuing to build on his concept of Lanvin as a “luxury supermarket,” Elbaz has multiplied the number of capsule collections he will present for next season to include ranges of jersey, long dresses, bridal gowns and dip-dyed cotton sportswear, along with evening silhouettes in denim in collaboration with Sweden’s Acne.

A BANKRUPTCY FLAGSHIP: Hartmarx’s future may still be unknown, but its leading brand, Hickey Freeman, isn’t waiting idly by. The luxury label is readying to open a temporary store at 545 Madison Avenue in New York in what was once the Alfred Dunhill space. The parent company’s bankruptcy had prompted the closure of the brand’s flagship at 666 Fifth Avenue last month. According to company sources, the so-called Hickey Freeman pop-up may open as soon as Saturday.

DESIGNING MINDS: Claudia Schiffer, Dasha Zhukova, Fiona Scarry, Mary McCartney, Emma Hill and Claire Waight Keller, gathered to fete winners of the Graduate Fashion Week Awards at London’s Earl’s Court Wednesday night. Giles Deacon and Matthew Williamson served as co-judges, handing Myrto Samou of Rochester University the grand prize of 20,000 pounds, or $32,844 at current exchange, for her elegant, tailored women’s wear collection. On the sidelines of the ceremony, Williamson, whose past runway shows have featured live performances by Grace Jones and Prince, said he’s not planning to lasso any big talent for his next ready-to-wear outing. “People keep asking me, ‘Who are you going to get next?’ Like I’ve got to top it. But I’m not getting anyone,” said the designer, who’s returning to London to mark the British Fashion Council’s 25th anniversary celebrations. “September’s all about the clothes.”