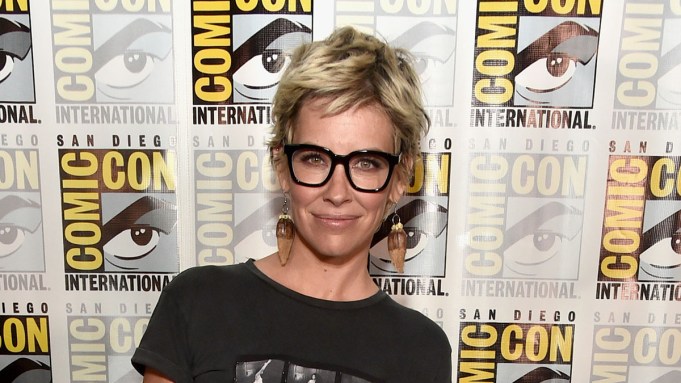 Evangeline Lilly embraced casual style while attending Comic-Con International on Saturday in San Diego, wearing a T-shirt and trousers to promote her upcoming Marvel film “Ant-Man and the Wasp: Quantumania.”

The 42-year-old actress wore a black AllSaints graphic T-shirt featuring a black-and-white photo montage of a woman twirling around in a breezy white dress. She paired the top with a gray pinstripe Giorgio Armani suit featuring a fitted blazer contrasted with oversize trousers. While Lilly wore the blazer for some pre-panel interviews, she took it off for photos and her panel appearance.

Lilly wore yellow pointed-toe pumps for a pop of color, allowing the shoes to peek out from her oversize pant leg. The star accessorized her chosen look with a pair of large black glasses, a silver watch, a large yellow stone ring and a pair of natural wooden statement earrings. Lilly wore her cropped blond hair in an effortlessly messy style, wearing minimal makeup for the event.

Lilly was at the convention to promote her upcoming film “Ant-Man and the Wasp: Quantumania,” which is set to release on Feb. 17. The actress plays Hope van Dyne (Wasp) in the Marvel Cinematic Universe. She was joined by the cast, including Kathryn Newton, Paul Rudd and Jonathan Majors.

Comic-Con International is an annual convention famed for highlighting upcoming blockbuster movies, television and more notable forms of action, sci-fi and horror entertainment. The convention spans four days with this year’s event highlighting upcoming projects from Netflix, Marvel, Disney and DC Comics including “Black Panther: Wakanda Forever,” “Shazam: Fury of the Gods” and “Lord of the Rings: Rings of Power.”