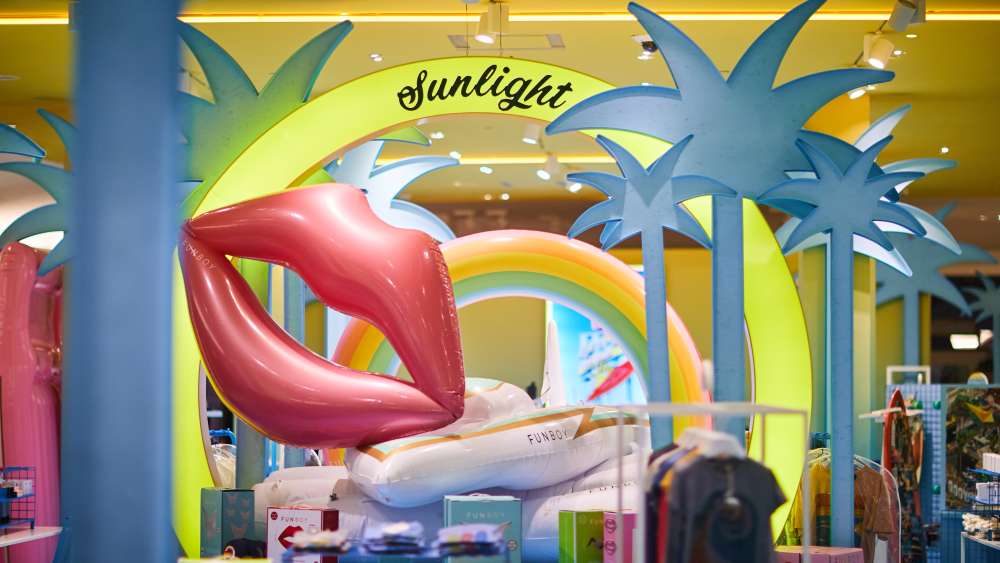 FROM L.A. WITH LOVE: A crowd of skaters and BMX riders mingled with the Paris fashion pack at Le Bon Marché on Wednesday evening for the launch of its “Los Angeles Rive Gauche” event, a six-week curation of L.A. designers and themed collections on all three floors of the Left Bank shopping institution.

“I love L.A.’s healthy lifestyle,” said French model Constance Jablonski, who named Abbot Kinney institution Gjelina and sushi spot Sugarfish as her favorite haunts. Despite the classic Californian snacks proffered at the event, such as avocado toast, chia pudding and detox juices, the model doesn’t think Paris isn’t ready for a radical change of diet: “French people love meat too much. Including me!”

Jablonski, who was sporting one of L.A.-based designer Clare Vivier’s signature striped pouches, came to support her boyfriend Matthias Dandois, who staged an impressive BMX demonstration at the foot of Le Bon Marché’s escalators.

Pedro Winter, founder of the Ed Banger record label and former manager of Daft Punk, remembered discovering skate and surf culture in Los Angeles. “I’m an Eighties kid, and Los Angeles was the source of many fantasies when I was growing up,” he said.

Though officially retired, Oster had spent the last few days personally testing the pipe, which he described as the most unusual he has ever built.

“These fabricators are great, very talented, but they’re used to building a set, a temporary thing that looks beautiful. I kept telling them, this has to actually work. Skateboarding is really hard on the structure,” he explained.

Patrice Wagner, chief executive officer of Le Bon Marché, traded in his customary white shirt for a distressed Metallica T-shirt by MadeWorn — part of a collection of one-of-a-kind band shirt reproductions that retail for 150 euros each in the brand’s zeppelin-shaped pop-up store on the second floor of the store.

“It’s crazy,” Wagner enthused at a lunch earlier in the day where guests included Oster, tattoo artist Dr. Woo, Serge Bueno, the founder of bike workshop Heroes Motorcycles, and actor Jesse Metcalfe, one of Bueno’s friends and clients. “We are doing more and more spectacular things to engage our customers.”

In order to convince MadeWorn founder Blaine Halvorson to take part in the festival, Wagner submitted to an unusual ritual: throwing a tomahawk. “I never had a tomahawk in my hand my entire life,” he recounted. “I tried, and with huge luck it happened that I threw the tomahawk in the middle. He said, ‘OK, you have a deal.’”

Halvorson said the test was his way of making people feel at ease.

“It’s a really amazing ice breaker, and it’s something that most people haven’t done before. It also kind of creates this amazing childhood endorphin, when you do it, that is nice to see in people. It sort of lessens all the pressure,” he explained.

The event also features a selection of Californian skin-care and makeup brands. “The L.A. look is all about glow,” explained Hollywood makeup artist Melanie Mills, whose namesake makeup line has just been picked up by Le Bon Marché.

Is the Parisienne, known for her minimal makeup, ready for a Hollywood makeover? “The trend of glamour makeup is becoming a worldwide phenomenon, but, from what I’ve seen, it’s definitely something that the Parisian girl will need to warm up to,” Mills conceded.