The ready-to-wear and footwear line will be out by the end of 2019, shared Andrade at Guess Jeans U.S.A.'s second annual pop-up event in L.A.

Guillermo Andrade, the designer and cofounder of 424, a fixture in L.A.’s streetwear scene, will release a collection with Adidas, WWD has learned.

Joining other prominent streetwear designers like Pleasures’ Alex James at the event, Andrade was presenting his capsule collection with Guess Jeans U.S.A., a division that, while pulling inspiration from the brand’s Nineties esthetic, has also been focused on producing collaborations with younger labels. The project was spearheaded by brand partnerships director Nicolai Marciano, son of the L.A.-based, family-run business’ cofounder, Paul Marciano.

“We have always been focused on youth, and obviously, in the Eighties, we were really pushing as an original fashion house, and we’ve become a big, global brand in over 100 countries in the world,” shared Nicolai Marciano, who’s been actively taking the brand in this new direction. “It’s become much more lifestyle, and I think commercial [for the] brand. We’re refocusing a lot on being a youth-culture-focused company and doing things in different ways, that aren’t traditional for a brand our size.”

The event — free to the public — was a carnival of sorts, with food truck vendors like Kogi and Happy Ice, drinks, games and a performance by rapper YG. The space, which featured a basketball court, soccer field and skating ramp, was a celebration of youth culture, sports and skateboarding. 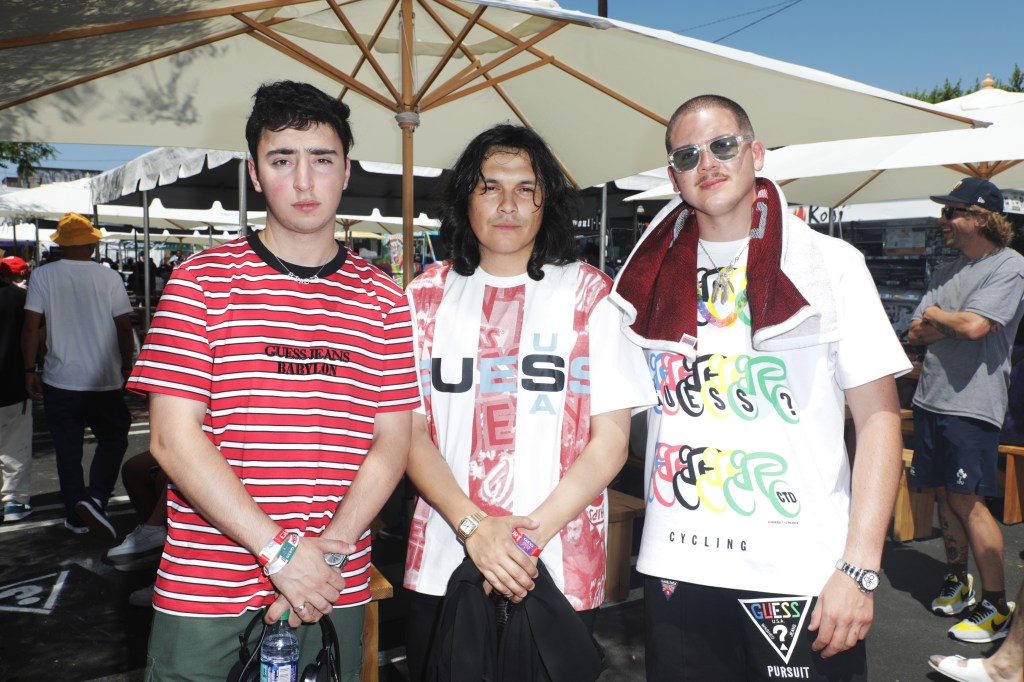 “It’s a nice comeback for a brand that crushed the Eighties and Nineties so hard,” said designer Darren Romanelli, who collaborates and works closely with Marciano. “I kind of look at myself as the in-house doctor, and we get to think of ideas and rework the collections. There’s a constant back-and-forth on where the brand should be going and how we should get there through collaboration.”

Capsules by Ronit’s Nico Rokit and Babylon’s Lee Spielman were also on display. Each designer created a variety of branded products, from sweatshirts to smaller items like lighters. Prices ranged from $40 to $110 for apparel, $15 to 20 for undergarments and $20 to $160 for accessories.

“I really love classic branding for everything we do, whether we’ve done collabs with Converse or Budweiser or Spitfire,” said Spielman, who runs Babylon with bandmate Garrett Stevenson of Trash Talk. Babylon, born out of skate and punk culture, has also collaborated with Off-White and Japanese retailer Beams. “If we can work with classic branding and put our own spin on it, then it’s the ideal…we super gravitate toward classic branding and strong logos and imagery, so it was tight to be able to take from the [Guess] archives and put our little spin on it.” Spielman’s designs included a jersey, hoodie, T-shirts, beanies and a skateboard.

“To me, Guess is like a heritage, OG brand,” he said, adding that he also created a skate video for the project. “I wanted to make it a snapshot of a current kid in California…I took all our little skate rats up and down the coast.” 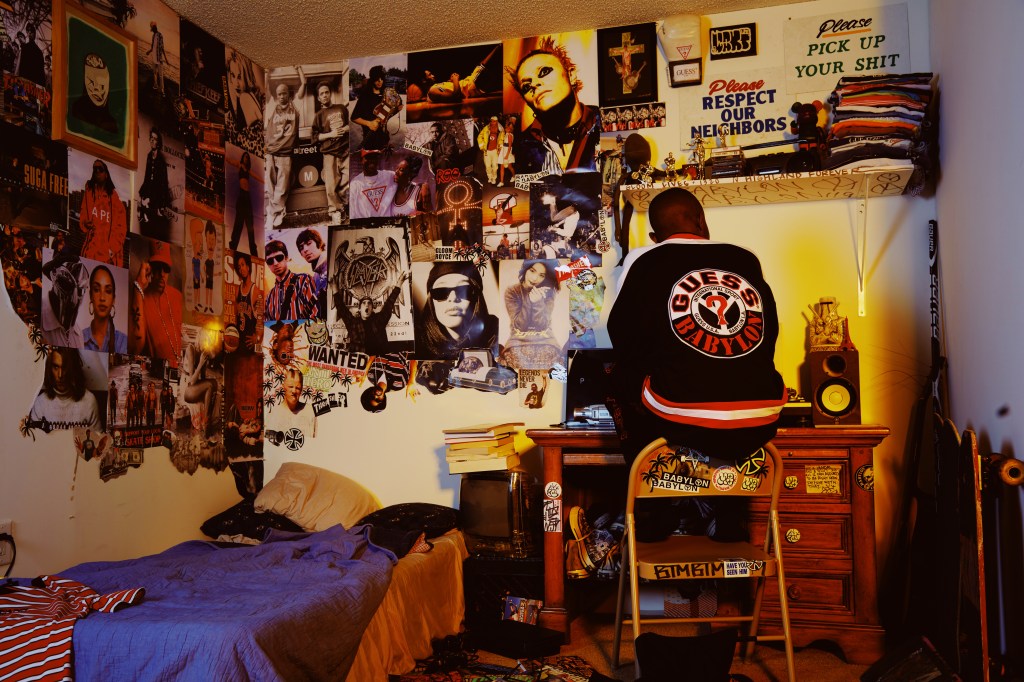 “That’s been the cool thing about this,” he continued. “Yeah, there’s product for sale, but it’s not necessarily the main focus. There’s probably 20 kids on the ramp right now skating who aren’t gonna buy one thing today, but they’re having a good time on a Saturday in L.A., and it gives a lot of kids something to do that’s not just your regular, run-of-the-mill weekend. I think, overall, to be able to provide an experience that’s more than just a product is a great thing.”

Andrade shared similar sentiments, adding that it was also an opportunity to make his designs more accessible. “For me, it’s always really cool to be allowed to work with or collaborate with brands that have resources to give the final product to people who can’t afford my other stuff,” he said. “My main line costs me a lot of money to make, so it costs a lot of money to sell. It’s nice to be able to make a product that kids can afford. The idea behind all collaborations really is how do we create a product for that 14, 15-year-old me, when I couldn’t afford the cool things that I really wanted. I use this opportunity to do that.”

Andrade, who has collaborated with various brands — from Barneys New York to John Elliott — founded his concept shop, FourTwoFour on Fairfax, in 2010 and his own line five years later. For his collaboration with Guess Jeans U.S.A., he showcased a line inspired by his love of soccer, or as he calls it, “football,” and designed jerseys, shorts, a sweatshirt and other items, from a water bottle to a fanny pack. An ad for the project can be spotted on a billboard on Fairfax Avenue.

“The main image was really that room with me and my little brothers playing FIFA when we were kids,” Andrade said of the photograph. “We’d be playing soccer all day, go home and keep playing soccer all night with the video game. We re-created our bedroom growing up.”

Originally from Guatemala, Andrade moved to the Bay Area when he was 10 years old, before relocating to L.A. “I have three brothers — two of them are in there playing FIFA, my other brother was deported, so this is even more of a nod to show love to my bro…I wanted it to be personal.”

Next, Guess is taking the initiative to Asia. “[It’s] going to be an extension of what you see today…it’s going to be soon,” shared Marciano. “…It’s important for a brand to tap in with every part of youth culture, streetwear culture, fashion culture, music culture, and that’s what we’re doing at Guess.”