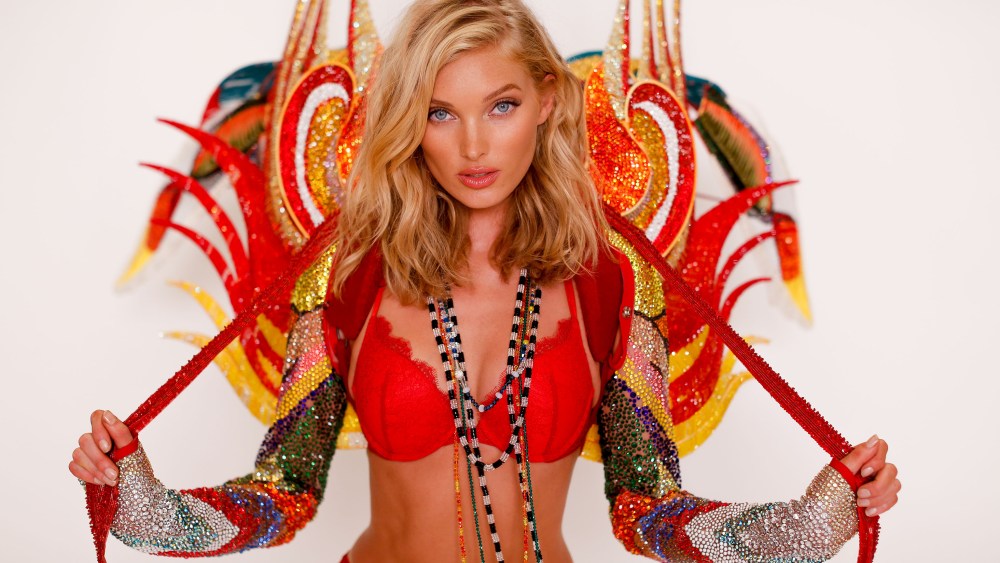 The 2017 Victoria’s Secret Fashion Show is set to be an even shinier and more extravagant spectacle than ever before. Not only is the brand jet-setting to Shanghai for the November show, it’s also celebrating the 15-year “Crystal Anniversary” of its partnership with Swarovski, the sole provider of crystal embellishments for the show. One million Swarovski crystals will take the runway, with Victoria’s Secret Angel Elsa Hosk chosen to strut the special anniversary showpiece.

“This year’s Swarovski outfit is probably our most spectacular. The outfit has an incredible wing that is completely covered in brilliant multicolored stones,” said Monica Mitro, executive vice president, brand communications and events at Victoria’s Secret. “It is one of the heaviest wings we have ever made.” With more than 275,000 crystals, 200 yards of woven ribbon and pavé crystals, hand-beaded jewelry and a crystallized wing harness, the wings weigh in at 14 pounds. “The Swarovski anniversary look will be a major standout. It is an explosion of color,” Mitro continued of Parisian couturier Serkan Cura’s work. And stunning it is, with an astonishing 29 crystal effects and colors, ranging from Citrine Shimmer and Crystal Luminous Green to Fireopals, Topaz and Emeralds. The look includes a fiery-red bra-and-panty set paired with long sleeves and enormous wings, encrusted with the colorful crystals, and finished off with feather-adorned sandals.

“The model that wears the Swarovski look needs to have a lot of confidence. The outfit always gets a lot of attention… and they are usually quite heavy because of the amount of crystals used,” said Mitro of choosing Hosk for this year’s look. “It’s not an outfit for the shy and timid.” Having opened last year’s show at the Grand Palais, the Angel was up for the challenge.

“When I found out I was wearing the Swarovski look I was so excited as I’ve always wanted to wear it. I can’t wait to walk down the runway in it,” gushed Swedish model Hosk about receiving the news, “… it was a happy day.” Having been an Angel for four years, with six shows under her belt, Hosk is no stranger to the VS fittings and runway, but this year marks her first time wearing the Swarovski look.

“[During fittings] it’s so bright, fun and different than previous years! The construction of the outfit makes you feel out of this world… like wearing an armor of crystals. The look is sexy, but also really cool and modern,” said Hosk of how she felt in the look. “The wings are my favorite part; they are a masterpiece, like an exotic superhero bug!”

Leading up to the Swarovski runway debut, Hosk’s pre-show rituals include exercising and eating clean in order to feel her strongest day-of. With the show set for Shanghai, fittings were earlier than previous years, giving Hosk extra time for mental and physical prep. Since the show is in China, Hosk’s post-celebrations include traveling to Tokyo with her boyfriend and indulging in her favorite Japanese foods.

Being the sole provider of crystals to the show, Swarovski bling will be sprinkled throughout the 87-look show a la Alessandra Ambrosia’s and Martha Hunt’s wings and Jasmine Tookes’ limited edition crystal encrusted bustier (that will be for sale in Victoria’s Secret stores). While the show date is under wraps due to security, the spectacle will be televised on CBS on Nov. 28, 10 p.m. ET, with rumored performers Katy Perry and Harry Styles, among others, and seasoned models Adriana Lima, Behati Prinsloo, Candice Swanepoel, Devon Windsor, Liu Wen, Lily Aldridge, Taylor Hill and more.