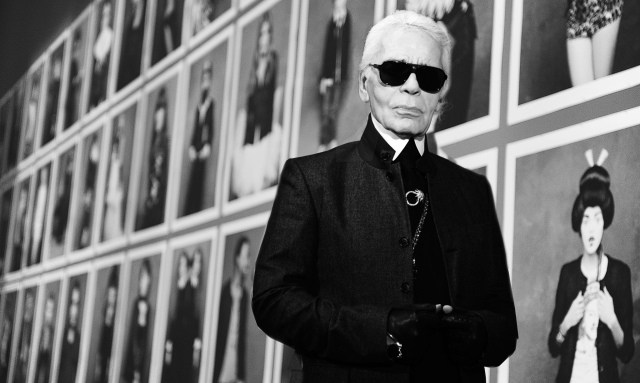 Ever wanted to try on Cara Delevingne’s tattoos for a good cause?

Then log on — quickly — to Karl.com or Farfetch.com on Sept. 26 when seven white shirts, all tributes to the late Karl Lagerfeld, go on sale, including one designed by Delevingne and demarcated with a lion and an elephant at the crux of the arms, among other markings.

Kate Moss, Tommy Hilfiger, Diane Kruger, Takashi Murakami, Carine Roitfeld and Sébastien Jondeau round out the personalities paying homage to the designer via one of his signature accoutrements. Each will be replicated 77 times and sold for 777 euros each, with all monies going to the charity Sauver la Vie, which funds medical research at Paris Decartes University.

“Karl always said that with everything you do, you need to surprise people,” said Roitfeld, style adviser at Karl Lagerfled and curator of the tribute project. “The overall reaction has been quite fun, and Karl would have loved that.”

The stylist and editor surprised with a built-in corset and asymmetric button stance for her cinched shirt, while Murakami elongated his like a tailcoat and festooned the shoulders and back with a tumble of embroidered flower patches mingled with skulls.

Moss scrawled part of a poem about laughter and happiness by Sonny Hall titled “Clutching Pens,” something Lagerfeld, who adored sketching, often did.

Meanwhile Hilfiger, ever the all-American, added stars and strips in red and blue, and added fingerless gloves like Lagerfeld wore faithfully for at least a decade.

“The huge level of support that has been pledged by some for the world’s most exciting tastemakers is testament to Karl’s legacy and the impact he made globally,” said Holli Rogers, Farfetch’s chief brand officer. The online fashion platform is the exclusive distribution partner for the tribute shirts, besides Karl.com.

The day before the shirts hit those online stores, they will be displayed at Karl Lagerfeld’s Paris headquarters during fashion week along with a host of other interpretations of white shirts by a long list of notables, underscoring how the late designer resonated across generations and multiple cultural realms, from soccer and car racing to Hollywood stars and retailers. Participants include Rogers, Kaia Gerber, Gigi Hadid, Helen Mirren, Olivia Palermo, Soo Joo Park, Nadja Swarovski, Amber Valletta, Lewis Hamilton, Simone Legno, Alton Mason, Alessandro Michele, Jean-Baptiste Mondino, Cristiano Ronaldo and Steven Wilson.

“This project has been a touching, meaningful way for us to pay tribute to Karl and his incredible legacy,” according to Pier Paolo Righi, chief executive officer of the Lagerfeld house. “It’s hard to think of Karl and not imagine him wearing his iconic white shirt. By inviting his friends and family to customize their own bespoke designs, they have been able to express their personal memories, anecdotes and experiences. When the project culminates at the exhibition at our maison, I anticipate it to have a powerful and moving impact.”

The original shirts will then be dispatched to Karl Lagerfeld stores worldwide so consumers can participate, too.

Assuming all are sold, the tribute project should yield almost 419,000 euros for Sauver la Vie, a charity Lagerfeld personally — and quietly — supported for years. In fact, he even drew the charity’s logo by hand and photographed the university’s medical staff for a limited-edition book.

The project reflects Lagerfeld’s passion for white shirts: “If you ask me what I’d most like to have invented in fashion, I’d say the white shirt. For me, the white shirt is the basis of everything. Everything else comes after,” he once said.

His favorite number is reflected in the prices and quantities. Seven was also his favorite arrondissement of Paris and the address of his bookshop on the Rue de Lille.

The Paris event, and online launch, come seven months after the passing of the iconic designer. Lagerfeld famously bought his shirts from Hilditch & Key on the Rue de Rivoli, and he extolled the luxury of donning such a crisp, pristine garment. He also wore custom-designed smocks at home for sketching, even though he confessed it was a dirty job.

The Lagerfeld house has been hyper-active in recent months, rolling out a fleet of special capsules by Roitfeld, one of the late designer’s close collaborators; fashion entrepreneur Palermo, and Jondeau, his longtime personal assistant and bodyguard. The affordable luxury label has been growing at a double-digit clip.

Cara Delevingne Performs at ‘Karl For Ever’ Memorial Event