The limited-edition holiday collection is out Nov. 10.

Anine Bing and Helena Christensen sporting pieces from the collection in the brand campaign.

Designer Anine Bing and model Helena Christensen have teamed up to offer an 11-piece capsule holiday collection, out Nov. 10.

The women, both Danish, connected as friends years ago when Christensen regularly visited Bing’s West Village shop in New York.

“It made me so proud that my teenage icon was shopping my products,” said Bing on Thursday. She was calling from Los Angeles, where her namesake women’s wear label is based. “Growing up as a little girl in Denmark, Helena was the biggest fashion icon and my biggest inspiration when it came to fashion.”

Christensen happened to live around the corner, it turned out.

“I would go in there and learned that the designer was actually Danish,” said the model and photographer. “To me, that’s great in many ways, to support one of your fellow Danes. And of course, loving what she made, what she designed.”

They began developing the line over a year ago, before the impact of the health crisis. They then had countless Zoom sessions, each trying on the collection from their homes, and met in L.A. for the campaign. The offerings range between $99 for a T-shirt to $499 for a silk jumpsuit and include jeans, a bodysuit, blazer, white suit and clutches.

“We just both brainstormed ideas of our own personal style and found a middle ground of what could work for both of us,” continued Christensen. 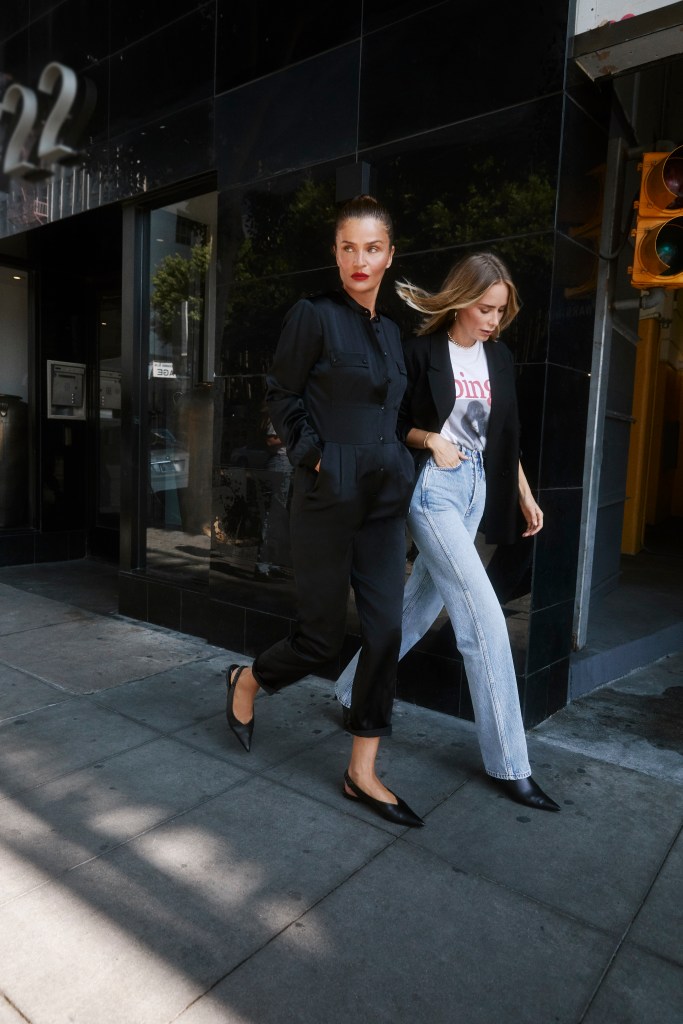 “She’s a little more experimental, a little more bohemian, relaxed in a way,” Bing said of Christensen. “I’m maybe a little more classic, but I also love rock ‘n’ roll. We tried to tie those two together.”

Mixing the minimalistic influence of Denmark and their mutual love for vintage clothing, the items were heavily inspired by the Nineties.

“It was such a great time period for fashion,” said Christensen. “I only had amazing experiences from that time. I feel that the way women dressed at that time had a powerful feeling to it. There was a businesswoman aspect but in a laid-back way.”

The aim with the launch is to uplift women, while providing style and comfort, the duo echoed.

“It’s been a super tough year for all of us, right, including myself,” said Bing, opening up about the challenges of the times. “It’s been a wild year and a rollercoaster and super hard. I have many days being home crying, trying to figure out how to do this. And also being a mom, you know, doing homeschooling while designing and trying to run this company with so many employees.

“With that said, my goal with designing is to empower women, and I think that’s more important than ever that we feel strong and confident and believe in ourselves and be here for a better change,” she continued. “So, hopefully with this collaboration and my whole collection in general, I hope and think I will continue to empower women and feel like their best version of themselves during this crazy time. I’m a positive person, and I try to look positive on everything, even though it can be hard.”