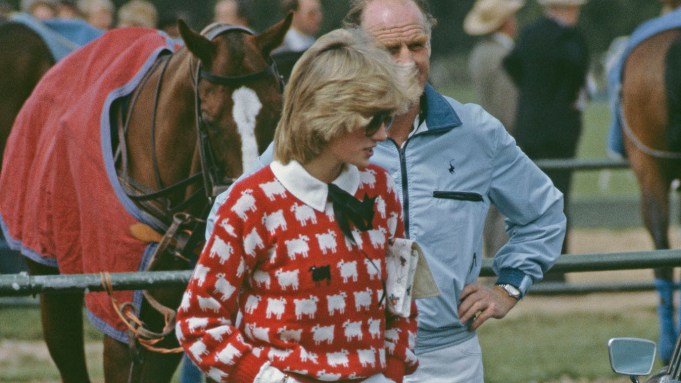 When Jack Carlson, founder and creative director of the irreverent, vintage-inspired men’s brand Rowing Blazers, was looking for inspiration for his company’s first women’s collection, he knew exactly who to look to: Princess Diana.

“Princess Diana was always a big inspiration and style icon for me,” Carlson said. He especially liked how she effortlessly wore men’s wear-inspired pieces and seamlessly mixed athletic and non-athletic styles while rollerblading in Regent’s Park or picking her kids, Princes William and Harry, up from school. He was also drawn to her propensity to mix “high and low,” a trend that continues to be relevant today.

Thinking about the new collection, Carlson was drawn to Diana’s “witty, humorous knitwear,” particularly the sheep sweater she made famous in the early Eighties.

That piece, a red knit jumper emblazoned with rows of white sheep — and one black sheep —was designed in 1979 by two twentysomethings — Joanna Osborne and Sally Muir — for their label Warm & Wonderful Knitwear, that began with a market stall in London’s Covent Garden. Lady Diana Spencer began wearing one of their sheep sweaters to her fiancé Prince Charles’ polo matches, and Warm & Wonderful was on the map. Later, David Bowie, Andy Warhol and other celebrities of the era became Warm & Wonderful customers.

He was surprised when he got “the loveliest note back,” saying the designers — who are now artists and sculptors — were eager to meet and discuss the original design, which hadn’t been produced since 1994, and its re-creation for Rowing Blazers.

“As artists, we’ve always identified with black sheep ourselves: because of a recessive gene, black sheep are born with black wool in flocks of otherwise white sheep. In a flock of a hundred, there might only be one black sheep,” said Osborne and Muir. “Since Diana’s first public appearance in one of our bright red sheep jumpers — at a polo match in 1980 — she and the design have been inextricably linked.”

But Carlson didn’t stop there — he also sought out the designers of another sweater the princess made famous: a soft pink and white sweater with the phrase, “I’m a luxury” blocked out across the front.

The original was produced in several colorways during the Eighties by British designer George Hostler and Gyles Brandreth, a writer, broadcaster and sometime Member of Parliament. Although Hostler is deceased, Carlson was able to work with his estate as well as Brandreth to reissue that sweater as well in Rowing Blazers’ inaugural women’s collection.

“Both of these sweater designs have been copied or referenced by others over the years — sometimes without crediting or acknowledging the original designers,” Carlson said. “But working with the original designers is exactly what makes this so special to me. I can just picture them in their 20s, selling their jumpers to Sloane Rangers, pop stars and royalty. I think there’s a lot of nostalgia in the air right now, and a great renewed interest in Diana’s style in particular. When I was little, in the early Nineties, my family lived in Hampstead in north London, and my mother had one of the original sheep sweaters. It looks as great now as it did then. The timing couldn’t be better, both for Rowing Blazers to launch its first women’s collection, and to bring these iconic designs out of the archives with the brands and designers who originally created them.”

Carlson, an author and the former coxswain on the American rowing team that represented the U.S. at three world championships, created Rowing Blazers in 2017. The brand, which has become popular with celebrities such as Timothee Chalamet, Dwyane Wade and Russell Westbrook, drew on his experience researching blazers for the world’s leading rowing clubs and collegiate teams. In the past three years the company has also made its mark with a bevy of limited-edition capsules and collaborations with everyone from Lands’ End and Sperry to J. Crew, United Arrows, Fila and Beams.

Carlson said from the beginning the brand has attracted a lot of attention from women. “We’re first and foremost a men’s brand, but we also make blazers for rowing clubs and women’s has been a big part of that,” he said. “And in our retail collection, the percentage that we sell to women has been growing significantly. So we know we have the customer and now is the time to start talking to her directly.”

The women’s collection could eventually be larger than men’s, he said. The line was originally supposed to launch last month, but since nearly all the pieces are made in Europe where the pandemic forced factories to close, it was delayed.

The sweaters will retail for $295, and other pieces in the collection will retail for $48 to $795. They will be sold at the Rowing Blazers New York flagship in Tribeca, which is reopening on Thursday, as well as on its web site and in Selfridges in London.

Carlson said Rowing Blazers’ sales are currently around 90 percent direct-to-consumer and the wholesale arm is kept intentionally small with only a handful of stores selling the line in the U.S., Europe and Japan. “We like to speak directly to the consumer and do things in a fairly unconventional way,” Carlson said. Because Rowing Blazers offers a lot of small, very limited-edition product and collaborations, they tend to sell out quickly and “that doesn’t lend itself to a lot of wholesale.”

Instead, Carlson said he’d be open to eventually adding stores in strong markets such as Los Angeles and London, but there are no plans at this time. But a pop-up shop will be opening in Fred Segal in L.A. later this month.

The brand is still mainly self-supported, but it does have some investors, including Winklevoss Capital, a fund created by brothers Tyler and Cameron Winklevoss who were on the rowing team at Oxford with Carlson, as well as former K-Swiss president David Nichols.