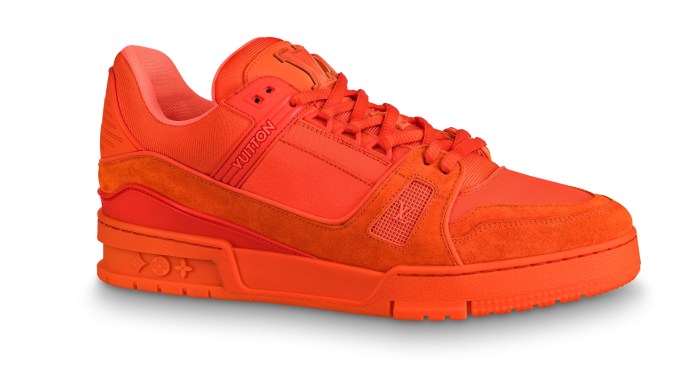 SHOP ‘TIL YOU DROP: Fans heading to Chicago for Virgil Abloh’s retrospective at the Museum of Contemporary Art may want to leave some extra space in their suitcase: in addition to a museum store and a temporary NikeLab space, the designer is opening a pop-up shop carrying exclusive Louis Vuitton merchandise.

The temporary space, or residency in Abloh parlance, will open from June 8 to July 7 on West Randolph Street in the West Loop neighborhood, home to some of the city’s best restaurants. Like some of his previous Vuitton pop-ups, the space will feature a giant mannequin, this time in an orange hue matching the capsule collection on sale.

Abloh, who is men’s artistic director at Vuitton in addition to heading his own label Off-White, teased a low-top orange Vuitton sneaker on his Instagram account in mid-May, sparking speculation online. It’s one of six limited-edition all-orange products that will be offered alongside items from the Vuitton fall 2019 men’s collection.

They also include a leather baseball cap, sunglasses, a chain belt, a soft trunk and a soft trunk backpack. It’s a full-circle moment for Abloh, who has spoken frequently about how he and his friends would visit the Vuitton flagship in Chicago’s upscale Michigan Avenue district, spurring them on to careers in the fashion industry.

His MCA exhibition, titled “Figures of Speech,” is set to run from June 10 to Sept. 22 alongside a pop-up store called Church & State on the fourth floor of the museum. It will carry a retrospective of best-selling Off-White product and new, exclusive collections inspired by the exhibition.